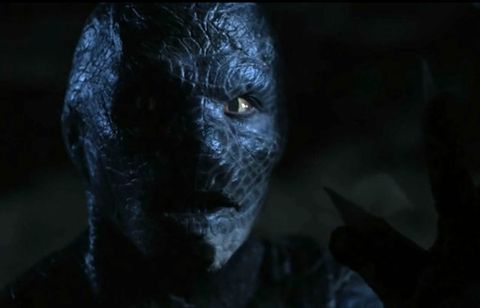 THE ONE WHERE The wolf pack hunts down the killer creature but have they got the wrong person?

VERDICT Last week Stiles and Derek were attacked by the lizard-like creature in the high school swimming pool. After which, Stiles claimed that he “knew” the creature and that it somehow seemed to know him too. It makes for a pretty great set-up for episode five – will it be someone we know?

Seeing as Derek was pretty humiliated by it last time, he wastes no time in diving into a full blown hunt with the help of his wolfie minions. First up, it’s Jackson (played by Colton Haynes) who seems a pretty solid suspect after losing two hours of self-filmed footage on the night of the full moon. Erica (played by Gage Golighty) snatches Jackson from his weight-lifting session and escorts him to the werewolf lair – at least that’s kind of what it looks like with all the leaky pipes and moody lighting. After plying Jackson with the venom from the creature, he becomes paralysed from the neck down just like everybody else. So, it can’t be him right?

The pack’s next target is Lydia but not before she has another Peter Hale vision in class in which she scribbles ‘SOMEBODYHELPME’ backwards on the board during her meltdown. How very Kubrick of her! Science is the next class and the lab partners are on a constant rotation which makes for some comical protection from Stiles and Scott. Erica gives her best shot as the uber-bitch as she strokes Scott’s thigh and digs her nails into Allison. Sadly, Gage Golighty’s performance seems to be getting more cringe-worthy as the episodes progress. Her attempts at the whole slutty/sexy/bitchy/badass Werewolf thing go awry as every close-up looks as though she’s having some unwanted bowel movements.

Scott and the gang spot Derek loitering outside school, so they decide to get Lydia as far away from him as possible. Jackson, Stiles, Allison and Lydia take hiding in Scott’s house (without him) with Allison keeping guard with her trusty crossbow. Meanwhile, Lydia and Jackson retreat to a nearby bedroom where he confronts her about the missing video tape footage. She is the only one left with a key to his house, so it makes perfect sense. As she sheds a few tears, it seems that Jackson is hit with a blast from the past and the two decide to kiss it out for a little while. The only problem is Jackson’s back seems to be getting a little scaly.

As the pack descends upon the house, Allison takes care of Erica whilst Stiles does his best to keep Isaac away. As Lydia runs for cover, Jackson has mysteriously disappeared so she decides to wait it out in the bathroom. Once Scott turns up and calms everyone down, the creature is spotted on the roof and takes off into the night. So, as we can see Jackson got what he wanted… well, kind of. That still doesn’t explain why he wasn’t immune to his own venom which begs the question, what is he?

Now, I know Teen Wolf is known for its top choice of musical accompaniments throughout the episodes with handy info at the bottom of the screen but things just start to get silly in “Venomous.” For one, the music is particularly terrible this time around and it’s a rare moment when dialogue isn’t accompanied by some synth-bass pop or give-it-all-away dramatic piano chords. It’s starting to make Teen Wolf look like a well thought-out parody.

BEST BIT Allison gets her own back on Erica by firing an arrow laced with paralysing venom. Girl fight!

BEST LINE
Scott: “You saw that thing up close; you know it’s not like us.”
Derek: “But it is! We’re all shape shifters and you don’t know what you’re dealing with. It happens rarely and it happens for a reason.”
Scott: “What reason?”
Derek: “Sometimes the shape you take reflects the person that you are.”

Teen Wolf airs in the UK on Sky Living, Thursdays