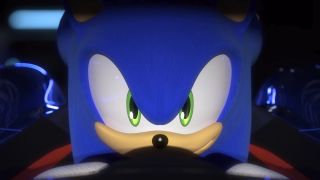 Team Sonic Racing is speeding its way onto Xbox One, PS4, Switch and PC on May 21, and to accelerate our hype levels, Sega showcased a shiny new trailer of the game at the SXSW gaming festival yesterday along with the news that a new Sonic game is in development. The trailer gives us our first look at all the customization options that’ll be available to us, with a slice of colourful gameplay to boot.

You can swap out an array of different parts at the garage to modify your car’s handling, boost, acceleration, defence and top speed. And when it comes zooming down the racetrack, you can certainly do it in style with plenty of paint job options, decals and finishes to play around with. You can also even pull paint jobs from other character’s cars if you really fancy their look.

But that’s not all. What about the horns? I hear you ask (probably). Well, you even change up the sound of your horn. From the quick glance we can see in the trailer at the sound selection, there’s a whole host of choices to pick from, including some sounds that are unique to certain characters in the Sonic franchise.

Alongside the trailer, Sega gave us our first look at a new two-part animated series called Team Sonic Racing Overdrive, which ties into the game.

And last but by no means least, the panel also revealed a new Sonic game is in development, but didn’t say much more than that. While it’s exciting news, it’s probably going to be quite a long time before we actually see anything of it. Still, this is a very nice distraction from the design of the Sonic movie, right?