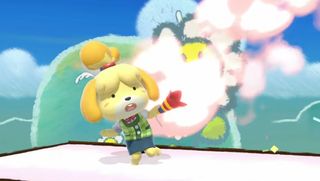 To its credit, Nintendo has clearly begun moderating which stages are featured on the app. As Eurogamer reported, the app was in much direr straits mere hours ago, with penises popping up basically everywhere. Barring enormous wooden breasts, the image above is one of just two sex-related stages I've seen. This is the other one:

That being said, refreshing the Nintendo app at the time of writing still yields a truckload of precisely the bile that you'd expect from the internet. I'm not going to share it here, but let's just say it reminds me of the dumpster graffiti at my old high school: swastikas, straight-up blackface, Spongebob is there.

The good news is that the app is not only getting cleaner by the hour, it's also getting flooded with shots of Joker which are pushing down all the NSFW crap. Plus I've seen some pretty cute stuff, from the obvious Nintendo character portraits to Garfield's face. Lots of posts also remind me of the intriguing-yet-ominous messages you'd see in Splatoon chat. One philosopher published a question which will haunt me for the rest of the day:

As a palette cleanser, let me leave you with this image of Joker Kirby holding a gun: