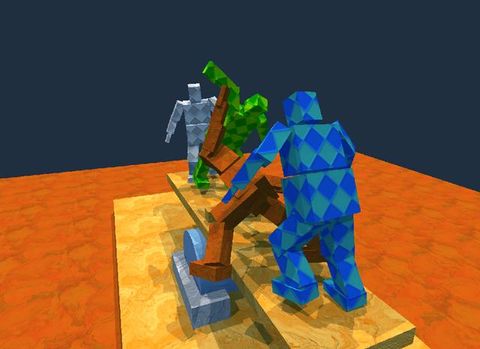 Most fighting games demand precision, dexterity and dedication to get the most out of them. Robotic ragdoll fighter Sumotori Dreams needs none of that and turns out just fine. Take up to four robots, which have the ability to right themselves if they fall over, and pit them against each other in a shoving match. You have only nominal control over your combatant, and the result is like watching a video of old men fighting.

The juddering robot combatants move so unsteadily that even the slightest jerk is enough to send them into uncontrollable death spins. You’re basically your own worst enemy – one missed push and you’ve condemned your poor robotic wrestler to smacking his face into the ground, tangling his limbs up with the other fighters, having his adversaries pile on top of him and technically ending the match. But that’s when the fun begins.

The developer has brilliantly realised the potential here. There’s a standard flat arena, but there’s also a set of stairs, a seesaw and even a breakable kitchen. Setting the bots loose in each one is worth the meagre few bucks the game costs, and unless you’re some sort of demon, it’ll honestly be one of the funniest things you’ll ever see.