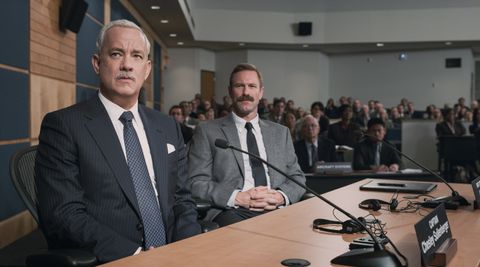 Sully is a skilfully made reconstruction of a recent real-life feat of heroic professionalism. But narrative tension is sorely lacking.

The real-life events of Flight 1549 might have been tailor-made for a Clint Eastwood movie. On 15 January 2009, a US Airways Airbus, having just taken off from LaGuardia en route to Charlotte, North Carolina, ran into a flock of Canada geese whose ingested bodies disabled both engines.

Veteran pilot Chesley ‘Sully’ Sullenberger, realising he had neither the height nor the speed to make it back to LaGuardia nor to any adjacent airport, decided to land his plane on the Hudson River – without losing a single one of the 155 passengers and crew members, who were all safely taken off by boat after evacuating onto the plane’s wings and inflatable slide.

Sully (played by – who else? – Tom Hanks), calm, unpretentious, above all utterly professional, is a hero after Eastwood’s own heart. Indeed, Clint himself is just that kind of filmmaker, making Sully a worthy celebration of professionalism at its modestly understated best.

It’s well-made and impeccably acted by all concerned, while the re-enactment of the emergency landing itself – which we get to see twice – is convincing down to the last detail.

It’s undeniably exciting, too: the passengers casting terrified glances at each other, the stewardesses yelling “Brace! Brace!”, the water hurtling up to meet us. The only problem is that the film, with its famous, headline-dominating storyline, is predictable from start to finish.

OK, most of us know what happened on that January day, and those that don’t will soon be reminded. So there’s a certain amount of adrenaline in seeing the watery touch-down brought off so perfectly, but no tension: no one’s gonna die.

Realising this, Eastwood and his screenwriter, Todd Komarnicki (working from Sully’s own published account of events, Highest Duty: My Search For What Really Matters), shift their focus to the aftermath of the incident: when Sully and his co-pilot, Jeff Skiles (Aaron Eckhart), are hauled up in front of a National Transportation Safety Board panel headed by a grim-faced Mike O’Malley (Concussion, R.I.P.D.) to be bombarded with hostile questions – were they sober, were they distracted by any personal preoccupations and, most crucially, why didn’t they try to make it to an airport? Just to add to the pilots’ ordeal, the NTSB claimed that the plane’s left-hand engine was still capable of functioning.

The dramatic irony here is strong. In public, in the press and on television screens all around the world, Sully and Skiles are being hailed as heroes, guys who kept their cool where a second’s hesitation, let alone panic, could have proved fatal.

Privately, meanwhile, before the panel, every decision they took is being called into question – to the point at which even Sully himself starts to have doubts, nightmares about the disaster that might so easily have happened. “What if I did get this wrong?” he asks his wife Lorraine (Laura Linney) when he phones her from his hotel room. “I’ve delivered a million passengers over 40 years, but in the end I’m going to be judged on 208 seconds.”

The film is at its most intriguing when we’re shown the elaborate reconstructive processes behind the panel’s inquisitions. First off we get the computer simulations, from which it appears that there would have been time to make it to an airport. This is then confirmed by live re-enactments carried out – and filmed – in a flight simulator at the aircraft-maker’s HQ in Toulouse.

At this point it seems as if things are going against our pilot heroes. But here, too, we can already foresee the outcome. First because if Sully and Skiles really had been disciplined, we’d have all heard about the worldwide outcry; and second, because who could imagine an Eastwood movie in which selfless, seasoned professionals wind up getting crapped on by a bunch of industry bureaucrats?

At 96 minutes, Sully is by some measure the shortest movie Eastwood has directed to date, and even then it feels a little padded out. A couple of flashbacks to Sully’s past – his initial training as a pilot, and his wartime flying experience – don’t add much.

There’s a warm sense of camaraderie between Hanks and Eckhart, swapping affectionate banter (even if poor Linney, who never shares the screen with Hanks, gets stuck with the ‘worried but supportive wife on telephone’ role), and some heartening shots under the end-credits of the real Captain Sully meeting up with a few of the passengers whose lives he saved.

But ultimately – and oddly enough, given that this is a largely faithful account of rare real-life heroism – it all just seems a little too comfortable.

Sully is a skilfully made reconstruction of a recent real-life feat of heroic professionalism. But narrative tension is sorely lacking.