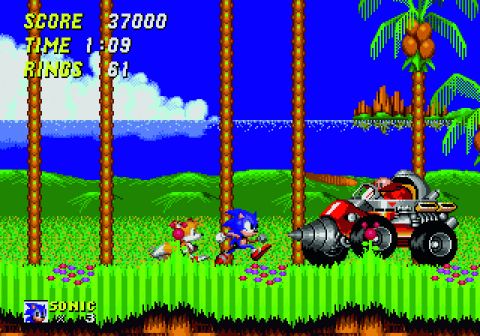 The entire Sonic collection on a cartridge the size of a special edition Christmas stamp… If we could go back in time and tell ourselves we’d be playing this on a full-colour dual-screen handheld, in the year 2010, we’d have been amazed. Surely it’s not going to take the best part of 20 years for the rest of the world to realise that Sonic is actually a load of old pants…

Now that retro is a legit part of the gaming business – and maybe even a pixellated art form in its own right – we know there are certain things we’re supposed to overlook in these creaky old games. But however we approach it, there’s no escaping the suspicion that these particular Genesis/Mega Drive oldies were somewhat less than golden to begin with.

When a large part of the thrill involves little more than watching a character run very, very fast, there’s clearly something missing. It’s a trick repeated in all four games on this compilation – Sonic zooms along a flat surface, with the occasional loop thrown in for visual amazement, and the only thing preventing you from completing a large chunk of the level simply by holding right on the D-pad is the odd rock or spike that stops you dead if you don’t see it in time.

There are more complicated parts, of course, but those are hampered by Sonic’s utter uselessness at anything below top speed. He accelerates about as quickly as a fully laden oil tanker, and is equally maneuverable. Consequently there are few areas that call for great dexterity, and much of the challenge comes from remembering which bumpers will bounce you the right way to collect some items hidden far off the screen.

Considering this is a game series that has long prioritised flash over function, you’d think they’d have made sure the conversion to DS was absolutely spot-on. But there are some weird juddery glitches in the scrolling, and the Genesis/Mega Drive colour palette looks grainy and muted on DS. There are few extras (a tiny art gallery) and no two-player modes. Sonic fans should check out the Virtual Console versions rather than this one. It’s far from a definitive compilation.