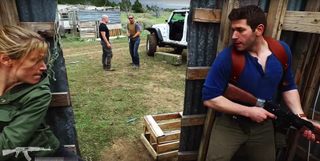 It says a lot about just how pretty Uncharted 4 is that this real life version doesn’t actually look as good as the game.

However, it still looks like amazing fun and is the work of Freakin Rad who actually filmed the entire thing in one take using a drone for extra bragging rights. That's impressive in its own right, but not quite as impressive as having that entire Uncharted 4 themed playground to mess about with. They could honestly hire that out to people, I'd pay to have go.