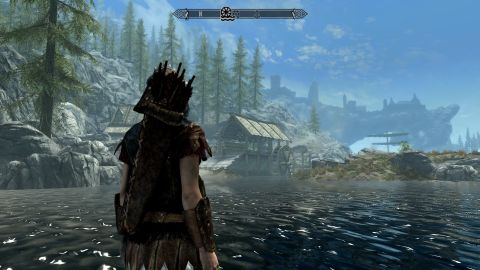 A wonderful recreation of Skyrim, which remains - despite rough edges and badly-aged elements - one of the greatest RPGs ever made.

There’s a single moment from my Skyrim Special Edition playthrough that perfectly sums up this game. I’m walking through one of world’s many beautiful forests, totally wrapped up in exploring every inch of the landscape, when I hear a commotion in the near distance. Looking for adventure, I head straight for it, and soon enough I spot a random Redguard soldier chasing a rabbit through the undergrowth. “Never should have come here!” he screams, as he brings a colossal warhammer down and crushes the life out of the poor beast. Foe vanquished, he immediately sheathes his weapon and acts like nothing just happened.

It’s ludicrous, totally random, and absolutely not what I was meant to see. At the same time, the whole scene has an odd kind of beauty that is unique to Skyrim. There’s no game quite like it - even Fallout, which is basically Skyrim in a radioactive alternate universe, with fewer trees and more slow-mo head explosions - and because of this it still holds up five years after it was first released. And while the whole world has been given a visual overhaul to make it look and feel like it belongs in 2016, this is very much the same game as before - warts and all. Thing is, it’s the warts that give this RPG its character, and they’re now just as much a part of the game as any of the races, dungeons, dragons or arrow-perforated knees.

Is this game worth buying if you played the game for 200 hours back in 2011? Yes, it really is, because the sheer joy of existing within Skyrim’s world remains unsurpassed. That inviting otherworldliness, which is at once fantastical and familiar, has been often imitated yet never bettered. Even The Witcher 3’s magnificent landscape - which is certainly better looking - can’t match that sense of magic you get from Skyrim. The visual overhaul for this Special Edition is good enough to let the game pass in 2016, and it probably makes the experience appear ‘as good as you remember it being in 2011’, even with the rosiest-tinted of spectacles on your nose. Does it look better than the PC version with any of the high-end visual mods in play? No.

In fact, if you’re a PC player unrestricted by the console cycle, then this game most definitely isn’t for you. Chances are you’ve played it more recently, and you’ve already modded the hell out of it. Special Edition doesn’t offer anything in the way of ‘new stuff’, unless you missed out on all the DLC first time round. The graphical boost and improved load times and draw distance will not impress you.

Accept Skyrim for what it is, though, and there are hundreds of hours of entertainment here. Even through a modern lens, many of Skyrim’s quests feel fresh and exciting. I’m not talking about the standard fetch-and-carry stuff that clogs up your miscellaneous tab, I’m talking about the Daedric artefacts, the story missions, and the cute little side-quests that clearly showcase the playfulness of the designers. What’s perhaps most impressive by modern standards is how well they all slot together, while also feeling like they’re a natural extension of your being in the world. A haunted house? Yeah, I’ll check that out. Fetch you a sacred horn? Ok then. Follow a talking dog? Well, yeah, fine - in the context of everything that happens to you in Skyrim, even something as outlandish as this never feels game-breakingly bizarre.

The best Skyrim companions: Which are the best followers to join you on your quest?

Skyrim’s rewards are perhaps a little more understated by today’s standards. We’ve grown even more accustomed to becoming the biggest, baddest dude in the galaxy / city / land after only a few hours of play, but Skyrim demands that you forge your legend inch by inch. In some instances, I actually found this quite frustrating - not because I wasn’t instantly rewarded, but because I knew how it felt to be higher level in this game. Having spent several hundred hours with the original version, it’s a strange thing to go back to the beginning and not lose your training wheels for a good 20-30 hours. Even then, death came quickly and frequently to me because I tried to rush through; tried to act bolder than I should have.

That’s the danger with a remaster like this - you can easily ignore the journey because you already know that the destination is so damn lovely. To do so with Skyrim SE, however, is to miss the point of the game. This is all journey, all discovery (both literal and personal), so you need to accept that the rewards will come, even if you need to wait 50 or so hours. For some, that might be a reason to avoid Skyrim SE. While nostalgia is a powerful selling point, the promise of getting ‘something new’ when you play a game is also a serious consideration. Previous players will only get the stuff they sort of forgot about, and that feeling of joy from obtaining or experiencing something new is dulled. If that’s ok, though, then carry on.

In terms of the actual content, Skyrim SE does a variable job of holding up. The world is still incredible, vast, and wonderful to explore. Get down to a more detailed level, however, and things fall apart a little. The acting, which was wooden back in 2011, is practically fossilised now, and the repeated dialogue gets intensely annoying very quickly. No, I get it, I shouldn’t have come here. No, nobody stole my sweet roll. Yes, I have heard about the reformed Dawnguard, actually, because you mention it every goddam time I walk past. Yet there’s still a humanity to every character that makes the world that bit more believable, and it’s not like you mind chatting to them because the base stories and script writing are still great.

The actual RPG systems hold up well. Menus remain slick and enjoyable to use, and the variety of skills combined with the levelling up system (which works by increasing the power of the stuff you actually do and use) ensure that you always feel like your character is progressing in the right way. Dialogue and cut-scenes have aged quite poorly, and been bettered by other games, but the bulk of the technical stuff and controls hold up well. Combat is fine for a first-person melee game, and the actual weapons and magic you use still feels like standard RPG fare. Very little has changed in the sword world, it seems.

And there are still bugs, despite several attempts to patch them out. During my playthrough it’s mostly audio stuff, which is a shame considering how wonderful Skyrim sounds in full flow. Music will occasionally just cut out, sound effects will distort, and dialogue will play out of place. There have been a few frame-rate dips too, but only one that made the game unplayable for a few seconds. More ‘friendly’ bugs, like characters exhibiting odd behaviour, weird death animations, and odd item physics are… well, they’re part of the game’s charm.

Special Edition also brings mods to console. While I had an absolutely terrible experience with even the simplest of mods (four full crashes and game resets in about half an hour, folks) I’m aware that a number of my friends and colleagues have run most mods without too much trouble. It’s safe to say that the Xbox One and PC versions are more stable than the PS4, which I’m using for this review. Do the mods add an extra dimension to the game? You really need to go big or go home with Skyrim mods. While the added effects mods are nice to have, they add very little, and the cheaty mods simply make you more powerful in slightly unusual ways. However, mods that change the game or the rules it’s built on are worth checking out, if you fancy something a little different. Just be warned that Trophies and Achievements are locked when you activate any mods, and your active save file will become a ‘mod save’ from then on, even if you remove all extras five minutes after installing them. Yes, I did get stung by that - how can you tell?

Overall, Skyrim Special Edition is a decent remaster. It does enough to justify its existence, and it’s clear that work has gone into restoring the game. SE is also reasonable value for money too, with all the DLC and mod support thrown in alongside the main game. So, a bit of ‘decent’ and a handful of ‘reasonable’. Hardly sounds like an essential purchase? And yet I’m going to whole-heartedly recommend that you buy it anyway. Why? Skyrim retains that magic - that wonderful sense of time and place that made players fall in love with it five years ago. Within this game you can do whatever the hell you like, and while the rules of the world limit you, there’s never a sense that Skyrim’s world is passing judgment on your actions. And that’s crucial. Too many open-world adventures demand that you stamp your mark on the world, that you change things forever, that you rule and conquer.

Skyrim doesn’t care about you. It’s a place that exists in its own right, and you interact with it however you see fit. That’s what makes it such a coherent, believable world, and that’s Skyrim’s enduring appeal. It’s a place where you escape to, where you define your own character according to the decisions you make - both physically within the game, and mentally in your own head - not the ones that are forced upon you. And, yes, it’s a land where it’s perfectly ok for hardened warriors to furiously crush the bones of bunnies, if that’s what they decide to do.

A wonderful recreation of Skyrim, which remains - despite rough edges and badly-aged elements - one of the greatest RPGs ever made.