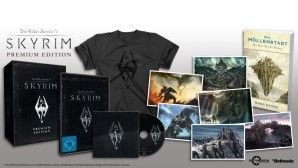 This Skyrim bundle includes a T-shirt with the Imperial Legion's emblem, a world map, a copy of official novel The Infernal City, and six new concept art postcards. It also includes a bonus disc with soundtrack selections, an ebook, and additional background and walkthrough videos. Amazon lists December 7 for the release date, which would be just in time for Saint Nicholas to leave copies in the shoes of good little German children.

Interestingly, no mention is made of the Premium Edition including any DLC, which was the case for The Elder Scrolls IV: Oblivion and Fallout: New Vegas' rereleases. Both of those packs included much of the DLC released for the games, although they didn't include physical extras.

The lack of DLC may be related to Bethesda's trouble porting the content over to PlayStation 3, or the company might just be exploring new ways to gussy up its catalog titles. Bethesda told IGN it plans to release more information about the package soon.

What do you think? Would you rather have a cheaper, Game of the Year-style pack with included DLC, or a Premium Edition with physical collectibles?