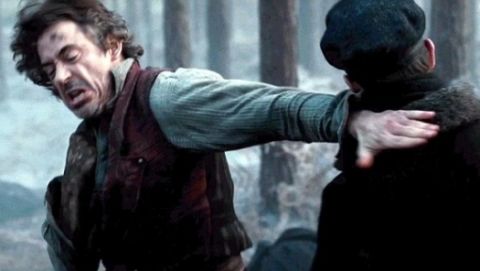 Lie down with me, Watson!” beseeches a bare-chested Robert Downey Jr. to Jude Law midway through Guy Ritchie’s follow-up to his 2009 Conan Doyle makeover. Hmm: is Britain’s most celebrated literary sleuth about to swap 221b Baker Street for Brokeback Mountain?

OK, so the line in question arrives in the middle of a locomotive stand-off, with Holmes and Watson only going supine to avoid a hail of Grenadier bullets ripping through a train carriage. But even through the cordite, the whiff of homoeroticism is hard to miss in a film that often forgoes deductive mystery in favour of unabashed man-love.

Witness the scene in which a dole-faced RDJ stands morosely by as Law walks down the aisle with his betrothed (Kelly Reilly), or another in which Watson labours manfully, and tearfully, to haul a wounded Holmes back from the brink of death. (God only knows what stops him administering the kiss of life.)

Small wonder Noomi Rapace barely gets a look-in as the gypsy fortune teller who joins them on their travels, this girl needing rather more than a dragon tattoo to draw Sherlock’s gaze.

Yet as close as Rob and Jude get as they pursue an international conspiracy from London and Paris to Switzerland, there’s an even more intriguing relationship in A Game Of Shadows : that between Sherlock and his fabled nemesis Moriarty, played with suavity and silky menace by Mad Men ’s Jared Harris.

Not only does this ensure Holmes 2 is an improvement on its predecessor, it also lends welcome dramatic heft to a film that might otherwise be defined by its smirking insouciance – not to mention present Holmes with an adversary who is his intellectual as well as physical equal.

Having a decent antagonist really makes the difference here. An early encounter between Holmes and Moriarty in the latter’s study recalls nothing so much as a Bondian tête-à-tête. (Rarely has urbane chit-chat about chess, graphology and celestial mechanics carried so potent a charge.)

Yet it does bolster your suspicion that this is a Boy’s Own club from the director’s chair downwards, something the virtual cameo of Rachel McAdams’ returning Irene Adler does little to dispel. You’d think Rapace would be well placed to inject an oestrogenic element as the Tarot card-reading Sim.

Yet the Swedish actress – not looking entirely comfortable in her first English-speaking role – is little more than a gooseberry, her third-wheel status reflected in the solemn and unsmiling demeanour she projects even when the movie’s at its goofiest.

You could argue husband and wife screenwriters Kieran and Michele Mulroney are just being true to their source material – the loyal Mrs Hudson apart, Sir Arthur’s yarns were never renowned for their female characters.

But given how little literary fidelity they display in other areas, their failure to give Shadows a satisfying non-male presence must surely count as a missed opportunity. The piece’s general attitude towards women is neatly encapsulated by the scene in which Sherlock pushes Reilly’s Mary off the aforementioned choo-choo.

Her indignities do not end there either, a later scene requiring her to share the screen with a naked Stephen Fry in his role as Holmes’ elder brother Mycroft. Take our word for it, readers: this is one blockbuster that would not be better for being in 3D.

Heading for a Falls

Like the bowler-hatted sniper who dogs its heroes’ footsteps, Shadows doesn’t always hit the target. But in the action department, it scores a bullseye, an opening scrap between Sherlock and four assailants setting the benchmark for a later skirmish with a seemingly invincible Cossack, a frantic dash through a forest splintered by heavy artillery, and a climactic confrontation at Reichenbach Falls that Conan Doyle lovers will recognise from The Final Problem .

But this is counterbalanced by an amusing interlude in a Romany camp that enables Ritchie to reference the raucous rough and tumble of his 2000 caper Snatch . (“Brace yourself, Watson,” Downey mutters as he and Law are circled by pickpockets. “We’re about to be violated!”).

Clocking in at 10 minutes over the two-hour mark, you might expect Shadows to drag. But the film romps along at a merry old clip, rarely pausing for breath as it speeds across Europe via car, boat and Shetland Pony.

Admittedly, you might wish Moriarty had a slightly more fiendish masterplan than the one he eventually details. But this is a minor blip in a higher-grade sequel that puts as few feet wrong as Sherlock does on the dance floor during the peace-summit finale.

“Our relationship has not yet run its course,” Downey Jr. informs Law at one point. And if Shadows achieves anything, it’s to make us hope he’s right.