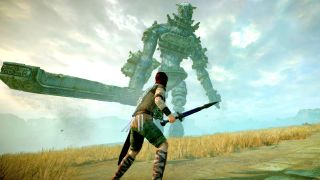 If you were tasked with convincing someone that playing video games is time well spent, that these things are possessed of a potential for artistic expression equivalent to that of older forms of entertainment, then Shadow Of The Colossus might well be the game you’d use as evidence.

Its central conceit is simple enough: you must defeat a series of gigantic enemies and in return your dead love will be resurrected. It also eases the player into the experience through cinematic sequences that very competently adapt the qualities lauded in film. But then you find yourself in a fiction of unquestionable thematic richness, of riveting emotional power, whose fundamental artistic qualities are completely fused with its interactivity. The stature of Shadow Of The Colossus as something worth discussing is entirely dependent on it being a game, and not a book or a film.

A difficult task in a lonely place

The rendering of its world and play mechanics coalesce to give you a sense of immense struggle without making the game too gruelling to complete. Though the ending is bittersweet, Shadow Of The Colossus convinces you of the vast hardships you have endured.

The rest of the best

It does this through many means, foremost with its most obvious innovation: rethinking the concept of boss battles to provide a string of 16 gargantuan enemies each of which more or less constitutes a level in itself, in the approximate language of other, more conventional games. That each level poses effectively the same basic mission creates repetition that compounds the immensity of this task. At the end of each battle, the protagonist is returned to where he began, increasingly bedraggled, only to have to pick himself up and press on, seeking out the next foe.

The landscape through which you travel, a startlingly beautiful but desolate peninsula cut off from civilisation by a range of mountains, its arcane ruins populated only by the occasional lizard, evokes a sense of total isolation. As you travel, often without incident for minutes on end, there is no musical accompaniment – just the sound of horse’s hooves and the distant call of an eagle. How small and alone you feel here, and how phenomenally large your task.

It’s a feeling that is obviously exacerbated by your opponents, the colossi, which are not monsters but vast structures come to life. Scaling them to find their weakspots is facilitated by elegantly simple controls but presented with a powerful evocation of physical effort. The animations of the protagonist as he heaves himself through a patch of moss on the spine of a colossus, or dangles precariously with one arm, provide such visceral feedback to your actions as a player that you find yourself holding your breath until the character has gained purchase. Yet, despite the exertion involved, the defeat of a colossus is only partly a matter for triumph; you’re reminded in their piteous death throes that you are murdering unique and majestic creatures, many of which don’t respond to your presence with enmity.

It is not the only emotional sting you feel during the game. When your horse, Agro, plunges into a ravine, selflessly tossing its master to safety, the sense of despair at this further sacrifice to your mission is palpable. It’s traumatic – Agro is much more than a superbly animated vehicle; given personality through cutscenes, it’s lent vitality by the fact that it doesn’t always obey. Momentarily frustrating as this may be, the sense of Agro resisting your control makes it your one source of companionship.

Although the girl you wish to resurrect cannot initially be drawn as a character, your emotional tie to her, and to the mission, is defined by circular logic: you struggle for her, so she is worth struggling for. When your joint fate is jeopardised at the last moment the feelings you experience are, brilliantly, given voice through the game’s interactivity – first by allowing you to satisfy a need for revenge, and then instilling desperation when you are given control yet can still do nothing to avoid your fate.

At all points, Shadow Of The Colossus delivers its artistic vision through your agency as a player, your active involvement enacting its main themes – isolation, struggle and loss – all facilitated by an aesthetic of great depth and unity. The result is something that is highly persuasive of the video game’s unique artistic value, while never sacrificing the pleasure of the experience.

This article originally appeared in Edge magazine. For more great coverage, you can subscribe here.