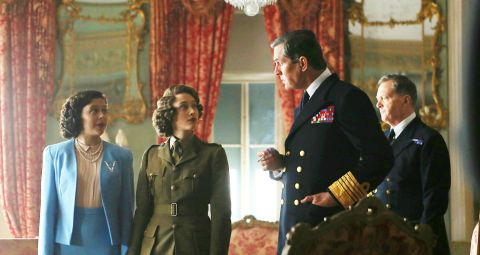 The princesses party like it’s 1945 in a slightly stiff period drama that might, nonetheless, prove to be this year’s The King’s Speech. America will adore it.

Who would have thought that Queen Elizabeth II, who barely cracked a smile during her Diamond Jubilee celebrations, could make for such luminous company? Of course, in A Royal Night Out she’s a youthful princess buoyed by the joyous celebrations of VE Day – and, let’s face it, Trevor De Silva’s script isn’t overly concerned with veracity, despite its true-story outline.

Still, better to print the legend if it allows indie It Girl Sarah Gadon (Cosmopolis, Enemy) to offer what will surely be one of the most winning turns of 2015. It’s just a shame the film scrambles to keep up...

In May 1945, news of Germany’s surrender sparks wild celebrations all across Europe. Determined not to miss out, princesses Elizabeth and Margaret (Bel Powley) persuade Ma and Pa (Emily Watson and Rupert Everett) to allow them out on the town, incognito (not having social media had its benefits). They’re to be discreetly chaperoned, naturally, but events careen out of control when the pampered princesses get separated from their military escorts – and each other.

Directed by Julian Jarrold (no stranger to period drama after Austen biopic Becoming Jane and the underrated 2008 adap of Brideshead Revisited), A Royal Night Out pinballs from Buckingham Palace to Trafalgar Square to Chelsea in a cacophonous conga of dancing, drinking and sweetly polite flirting.

It is, bizarrely, a proto The Hangover or Very Bad Things or Superbad – any one of those riotous movies where partying spirals out of control. OK, so no-one’s downing jizzfizz beer à la Stifler but showing Princess Elizabeth teeter on the edge of romance with firebrand commoner Jack (Jack Reynor) is, in its way, altogether more shocking; Daily Mail readers will burst blood vessels.

Jarrold struggles to sweep things along with quite enough vigour – budget constraints crowd the edge of the frame – but Gadon is intoxicating as Elizabeth. A star is born.

a royal night out

The princesses party like it’s 1945 in a slightly stiff period drama that might, nonetheless, prove to be this year’s The King’s Speech. America will adore it.