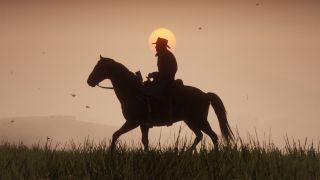 Dan Houser is leaving Rockstar, departing the studio after what parent company Take-Two described as an "extended break" that began back in spring of 2019. The former vice president of creative at Rockstar Games will put in his last day with the company on March 11.

Dan Houser is one half of the Houser brothers, a pair of game developers who have led many of Rockstar's creative efforts since Grand Theft Auto 3. They frequently worked alongside producer and former Rockstar North president Leslie Benzies, who left Rockstar back in 2016. Benzies' parting with Rockstar included a lawsuit over allegedly unpaid royalties, but there's no indication so far that Dan Houser is leaving on negative terms with the company.

With Dan Houser on his way out, that will leave Sam Houser as the last well-known leader to oversee Rockstar's ascent from relative obscurity to one of the most successful companies in games. Here's the official statement from Take-Two, as conveyed in a report to the U.S. Securities and Exchange Commission.

"After an extended break beginning in the spring of 2019, Dan Houser, Vice President, Creative at Rockstar Games, will be leaving the company. Dan Houser’s last day will be March 11, 2020. We are extremely grateful for his contributions. Rockstar Games has built some of the most critically acclaimed and commercially successful game worlds, a global community of passionate fans and an incredibly talented team, which remains focused on current and future projects."

Rockstar is a massive game developer with studios full of talent to draw from in covering for Dan Houser's absence. However, it's still surprising to see his departure emerge this way. If Dan Houser's extended break began in spring 2019, that would put it just a few months after the release date for Red Dead Redemption 2. Rumors point to Rockstar busily working on GTA 6, and it remains to be seen how much of an effect he'll have had on the end product whenever it finally arrives.

First GTA 6 may have been teased in a tax return, now we're learning about leadership changes in financial reports.