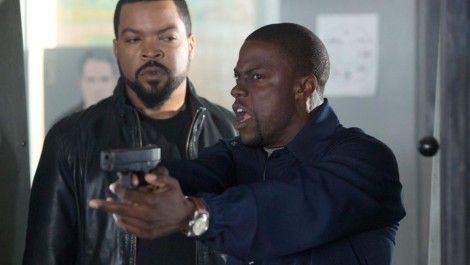 Can you be physically assaulted by a comedy? Anything might seem possible after enduring Kevin Hart’s jackhammer performance in this mismatched buddy-cop movie.

Hart is Ben, a fast-talking high school security guard with big dreams of marrying his girlfriend Angela (Tika Sumpter) and becoming a cop. After getting accepted into the academy, he convinces his future brother-in-law James (Ice Cube), the toughest detective in the Atlanta police force, into letting him ride along with him on his patrol.

The disapproving James takes him on a series of exasperating calls designed to scare Ben out of Angela’s life.

As often happens in this kind of set-up, the two get entangled in an investigation and Ben’s obsession with videogames helps bust up a deal between generic Serbian illegal gun dealers and a shadowy crime kingpin named Omar.

Hart also starred in Tim Story’s Think Like A Man , but in that film he was doled out in smaller doses. Here, he and Cube are in virtually every scene and the dynamic never changes: Cube is unmovable, oblivious to the fact that he’s in a comedy, while Hart hyperventilates like a caffeinated cartoon.

True, Ride Along never aspires to be anything more than a low-watt 48 Hrs. but Hart and Cube never gel and the gags aren’t funny. Note to Hart: YELLING isn’t always the best comic delivery.