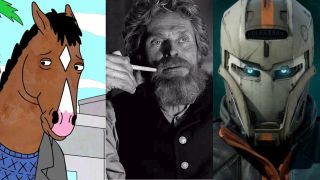 1. Kentucky Route Zero: TV Edition arrives, proving that all good journeys must come to an end

Cardboard Computer's subversive point-and-click adventure is reaching its final destination on January 28. A story told in five acts, for PC players it's been a defining game of the last decade – the wait for the fifth and final act as excruciating as it has been anticipated. For you PS4, Nintendo Switch, and Xbox One owners out there, you're going to be lucky enough to experience this all at once. Kentucky Route Zero: TV Edition contains all five acts, as well as the supporting interludes, and I promise you that this is a journey worth taking. It's a beautifully written, designed, and executed adventure that explores the fraying edges of American culture through spiritual ideas and minimalist assertion. Take each act at a time, give yourself some time to breathe between each of them, and settle in for one of the defining games of the generation.

2. Jump in to Disintegration's upcoming beta, and discover whether Halo's Marcus Lehto has another sci-fi hit on his hands

The spring release schedule has suddenly got a lot quieter, with a string of delays now making the next few months far less packed than previously thought. Thankfully, a new strategy shooter hybrid from the co-creator of Halo is holding a beta next week, and you're all invited. From V1 Interactive, a new indie studio led by former Bungie dev Marcus Lehto, Disintegration is best described as Destiny meets XCOM, plopping you in the role of a post-human pilot who commands squads of supersoldiers from atop a combat-ready warship. While Disintegration will have a full campaign at launch, the upcoming open beta is all about the game's ambitious multiplayer component, which features several factions, game types, maps, and more. You can sign up here, with separate betas for both PC and console players.

What: Disintegration beta
Where: PC, PS4, Xbox One
When: January 28 - February 1

3. Gretel & Hansel is a fairy tale that's not for children

The fairy tale of Hansel and Gretel has always been nightmare fuel, with its evil stepmother, gingerbread real estate and cannibalistic witch, and the new movie adaptation from horror director Oz Perkins really stays true to the spooky origins. As in the original tale, Gretel is the hero - here played by IT's Sophia Lillis - facing off against Thor: The Dark World's Alice Krige as the witch, while her little brother stuffs his face. There's definitely more to discover here than the same old story you've known since kindergarten, and it doesn't look as if any of the surprises it's hiding are going to be nice.

What: Gretel & Hansel
Where: Theaters
When: January 31

4. BoJack Horseman says goodbye – but will he get a happy ending?

This is the end. No more horsin’ around. BoJack Horseman’s unique brand of equine ennui has made us laugh and cry (mostly cry, let’s be honest) across the past six years. Now, each of BoJack, Diane, and Mister Peanutbutter’s journeys are coming to a potentially crushing close. We’re not ready. There aren’t enough tissues in the world to prepare us for what’s to come in the final eight episodes that make up the second part of season 6.

It’s BoJack’s fate we’re really emotionally interested in, though. The newly-grey washed-up actor has mellowed somewhat in the past couple of years. Sure, there’s still copious amounts of drink and drugs involved, but he’s seemingly changed for the better and probably deserves to ride off into the sunset with his dignity intact, if nothing else. But this is BoJack Horseman we’re talking about. Expect anger, angst, and possibly a shock death or two come Friday – and prepare for everyone to ask you “why the long face?” on Monday.

What: BoJack Horseman season 6, part 2
Where: Netflix
When: January 31

5. Finally the UK can fall under the strange, seafaring spell of The Lighthouse

Robert Eggers' film has made its way across the stormy seas, with the UK and its unsuspecting citizens acting as the proverbial lighthouse guiding it there. Cast aside any notions you may have about The Lighthouse because nothing you expect will happen and everything you imagine about it is wrong.

Willem Dafoe (sporting a beard worthy of Herman Melville and a face that stretches and morphs like it's made of Play-Doh) and Robert Pattinson (trying so damn hard to do a New England accent and failing brilliantly) are two lighthouse workers who have just arrived on a desolate island. Now is a good time to remind you that Eggers' debut film was The VVItch, so expect The Lighthouse to lie at the intersection of human anxiety and the inexplicable supernatural here.

There's an eerily entrancing lighthouse lantern, fart jokes, tensions that churn like the sea, a mermaid, the veneration of seagulls, as well as what may be the best monologue of the last decade in a seaman's curse bestowed upon Pattinson by Dafoe. I can't implore you enough to go see this film. It will stay with you well beyond the credits rolling, I promise.

What: The Lighthouse UK release
Where: Theaters
When: January 31