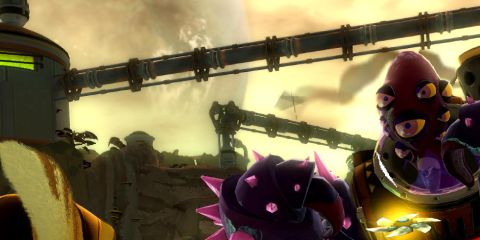 Quick question: Do you like the idea of a cherished platforming franchise celebrating its 10 year anniversary with a strategy spin-off? If not, you better stop reading. While specific elements of the Ratchet & Clank franchise persist, Full Frontal Assault isn’t a typical game in the series. The purists among us might scoff, but it turns out that their skepticism will be unfounded.

Stepping outside the franchise's 3D platformer comfort zone, FFA takes Sony's series in the direction of the real-time strategy genre. Mixing elements of tower defense and capture the flag, the game includes both cooperative and competitive modes, where players arm and defend their base from either the oncoming invasions of AI-controlled opponents or other players online. Once all six generators inside the player’s base are destroyed by the opposing forces, the player loses.

The single-player or cooperative (online or split-screen local) campaign mode is set across five large, open levels. In each, the player is tasked to seek out and pull a series of levers, which will eventually unlock a larger switch. The levels have a nice large expanse to run around and search for hidden goodies like collectibles and more money, and the multiple planes in the platform-based environment certainly add to the scope of the exploration. It's a fun and comfortable way for longtime platforming fans to ease into the new strategy elements.

Unfortunately, unearthing hidden collectables has very little to do with defending your base. Enemies will attack your base in intervals no matter what you’re doing, and while playing solo, being caught with your pants down when trying to score a new weapon far off from the base can add a little bit of challenge. Plus, once the map layout is memorized it simply turns into tedium.

Each level can be finished in less than an hour--shorter if you plan on completing the speed run challenges--and typically end with a massive invasion from the AI enemies. However, it’s only challenging for your first run through the game. As weapons level up and perks are unlocked for the characters, even the last-minute swarms of foes will feel like swatting flies. If you enjoy overpowering the computer by grinding through the levels and scavenging for hidden knick knacks, it can make for a fun time, even with only five levels. But others will feel that it’s a short game, padded with unlockables as a carrot for return trips through.

In co-op, especially, the campaign is a joke. If played patiently, a team can finish all of the objectives and defend the base without breaking a sweat. This might sounds like a negative criticism, but it turns out it can be a total blast. The AI opponents have a monastic devotion to getting into your base and blowing your generators, so if you enjoy split-screen couch co-op, it’s easy for one player to efficiently run through the level while the other mercilessly mangles their incoming foes. Again, with so few levels to go through, it will eventually get tired, but it makes for a fun alternative to going solo.

Online PvP is where the game really sings. Designated in either a 1v1 or a 2v2 setup, players compete under an altered ruleset for resource-gathering, troop-spawning, and base-attacking. Though the the build-up is slow in this mode, 1v1 battles are tense and usually brief, lasting around 10 minutes unless you’re playing against a particularly patient opponent. As everything happens in real-time, some quick decisions must be made on whether or not to spawn more units or build more defenses, which can lead to a few different play styles. The pace and flow greatly alter in the 2v2 mode, though, where communication between players is key. A well-planned strategy that can be audibled on the fly always wins out over teams with no ability to interact, making headsets necessary to be competitive.

The real problem here is that, while the maps in the PvP modes have some variation between each other, they’re truncated versions of the campaign maps and feel a bit cramped. Worse, even though they're randomly generated, you’ll get bored of them quickly. In both modes, maps have plenty of small nooks to find hidden goodies and it’s initially rewarding to find them. But two levels in particular are structured nearly identically in key places, and you’re then keenly aware why you only spent half of what you normally would on a game in this series. The gameplay is sound, but there isn’t a lot here to keep you hooked for long.

Full Frontal Assault isn’t as much of an evolution of the series as it is a fun experiment with its mechanics. Unless the support is there for more maps down the road, it might not be in your regular rotation for more than a few weeks or so. Still, it’s a pretty good bang for your buck whether you’re a longtime fan or not.