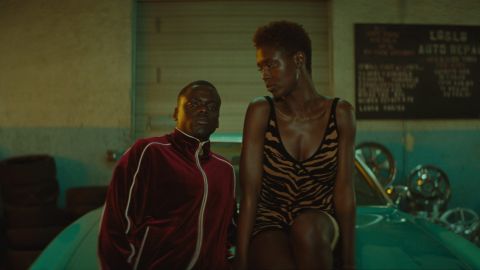 Daniel Kaluuya is the motor for this lyrical but hard-hitting road-movie, fuelled by fury and frustration.

Political, provocative and poignant, this love-story-on-the-lam propels the #BlackLivesMatter movement into the multiplex. A fierce piece of ‘protest art’ from feature first-timers writer Lena Waithe and director Melina Matsoukas, it’s an unapologetic conversation-starter, with a killer thriller opening, as awkward first-daters Queen (a brusque Jodie Turner-Smith) and Slim (Daniel Kaluuya) find themselves pulled over by a racist cop, and slammed into a terrified self-defence killing.

Drawing inspiration from real-life experiences of victims like 2016’s Philando Castile, this taut, realistic slice of police brutality launches them into a genre-bending story that wraps their slow-burn romance around a fugitive road movie. Scared and squabbling, the duo take off from Cleveland, slaloming through the Deep South and unnerving YouTube fame to seek sanctuary with Queen’s sly, pimping Uncle Earl (the deliciously grandstanding Bokeem Woodbine) in New Orleans: “If it ain’t the black Bonnie and Clyde!”

Skilfully drawing out the human story behind the tragedy, Waithe’s script is alternately driven and dreamy, contrasting tense set-pieces (SWAT teams storming a Kentucky safe house, a heart-in-mouth leap to freedom) with playful roadside revelations. Her frank and witty dialogue (such as rating fat vs skinny Luther Vandross) transforms the two bickering strangers into a ‘ride or die’ partnership.

The script is sleekly complemented by Matsoukas’ stunning visuals, giving a moody, neo-noir vibe to handsome retro-diners, a bluesy juke joint, or the wide Louisiana landscape, all displaying the pride in black history and culture she honed helming Beyoncé videos like ‘Formation’. As the couple become icons, supported by risky rallies and awestruck kids, Matsoukas burnishes them with a melancholy Moonlight-style beauty of face and place.

The visuals neatly reflect Slim’s transformation from rectitude to rebellion and Queen’s increasing vulnerability as they pinball south, unearthing scorching family secrets and risky Underground Railroad-style support within the black community. Packed with big moods and big themes, the film leans heavily on Kaluuya’s upright Slim to carry it along. Turner-Smith (another Brit) is pleasingly strong, if a bit brittle, her Queen hell-bent on pushing them to freedom.

However, they can’t keep the film’s otherwise deft balance of the personal and political from faltering, particularly in a Munich-style mash-up of rage in the street and love in the front seat. Still, it’s a stunning portrait of the black experience in America. Harking back to ’90s black-cinema gems like Set It Off, it amplifies a nail-biting thriller into a full-throated roar against systemic racism.

Daniel Kaluuya is the motor for this lyrical but hard-hitting road-movie, fuelled by fury and frustration.