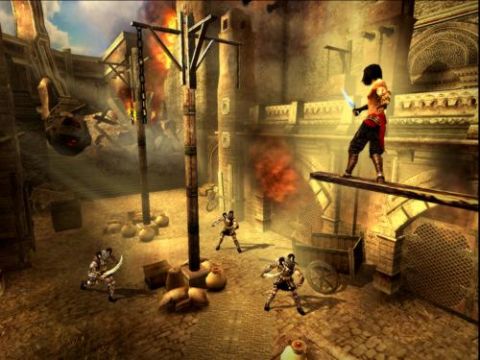 While playing Prince of Persia: The Two Thrones, you’ll likely keep asking yourself the same question: Just who the hell would build all this stuff, and why?

But never mind that all the game’s structures are wildly impractical or that half the buildings in Babylon are filled with giant saw blades and retracting ledges. What matters is that it's fun. And after the dark, brooding Warrior Within, "fun" is something this series sorely needed.

Picking up where the last game left off, Two Thrones opens withthe Prince returning hometo Babylon to find it in flames. It seems that by mucking around with the past in the last game, he's unwittingly resurrected one of his greatest enemies. Said enemy sacks Babylon and unleashes the deadly Sands of Time, turninghis soldiersinto monsters. Now Babylon is infested with sand zombies, the Prince is hunted through the streets and, worst of all, he’s lost his shirt again.

Despite the downer of an opening, Two Thronesmarks a return to the lighter, more adventurous tone of The Sands of Time, as well as to the puzzles that made that game great. There are still plenty of enemies to fight, but now there’s a much greater focus on leaping, running and climbing your way through baroque deathtraps. These bits are challenging, but the solutions are usually obvious enough that you won’t need a strategy guide. It doesn't help, though, thatthe controls are touchy enough toaccidentally send you leaping off a cliff or dashing up the wrong wall. Thankfully, the Prince can still slow down or reversetime, letting you undo any boneheaded mistakes.