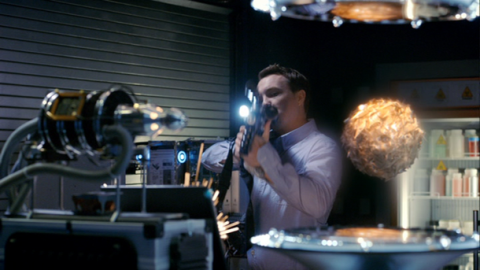 THE ONE WHERE A mini anomaly leads to a cataclysmic insect infestation in the ARC.

VERDICT A very effective base-under-siege thriller which delivers a whammy of a twist at the end, the latest episode of Primeval almost, but not quite, manages to distract you from some really clunky plotting in places. Overall, the good outweighs the bad, but the bad does occasionally leave you wincing. And we’re not just talking about April’s ongoing evil librarian shtick.

The central concept of the ARC overrun by prehistoric beetles is generally well-handled, alternating some expertly directed moments of tension with some excellent action scenes. The two stand-out Die Hard -wannabe moments – when the ARC team is spraying insecticide at the insects as they fall from the ceiling, and when Connor and Matt use high-pressure hoses to clear a corridor of the creepy crawlies – show that director Robert Quinn is a force to be reckoned with. They should sign him for Doctor Who quickly. And wasn’t it great that for once, the air ducts were used for something other than the heroes’ escape route?

The effects were also top notch for the most part. The beetles were an impressive and unusual kind of Primeval beastie; the scene with them devouring the guard was downright creepy. On a couple of brief shots, though, the beetles did seem suspiciously orderly in their swarming.

The epilogue, where Connor discovers that Philip lied about not instigating the self destruct, is another great, great moment, and a clever way of getting Connor 100% on the Abby/Matt team. Shame the episode had to continue on for a few more minutes of, frankly, pointless hammering home of the point, as Connor’s discovering would have been a very effective cliffhanger.

The episode was also less than successful when it came to manufacturing drama to stretch out the story. Jess’s allergic reaction was both a distressingly obvious ploy and rather tedious in the way it played out, while the whole Rex subplot was just downright tedious. You could almost hear the gears of the plot mechanics crunching and grinding away in the background. Or at least you could when they weren’t being drowned out by Philip going, “Mwahhhh-haaaa-haaaaaaaa!” They guy is becoming more and more of a caricature week by week.

Overall, though, a thoroughly enjoyable romp that sets things up promisingly for the final showdown

MONSTER OF THE WEEK Prehistoric beetles.

TRIVIA Helen Raynor is the third Doctor Who scriptwriter to write for Primeval , following Paul Cornell (who wrote what probably remains the best episode of Primeval ever – the one with the mammoth on the motorway) and James Moran. Raynor wrote the “Daleks In Manhattan” two-parter and Sontaran two-parter for Who .

BEST LINE No Lester again! Don’t the producers realise that he’s one of the main reasons to watch the show? (Don't worry – he gets some great moments in the last two episode). Anyway, in his absence…
Abby: This isn’t some noble sacrifice Armageddon thing where you blow yourselves up to save the rest of us?”
Connor: “Well, I hope not, if I’m honest.”