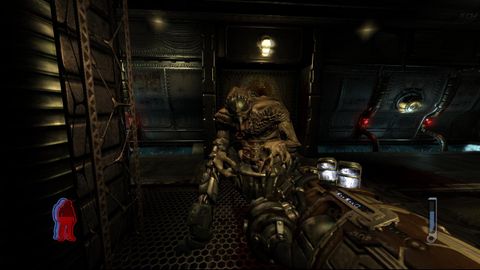 You might want to hold onto something for this one: Prey turns fast-paced first-person shooter action on its head quite literally with some dizzying gravity effects that would have Sir Isaac Newton spinning in his grave. In multiple directions.

As Tommy, a Native American on a quest to rescue his girlfriend Jen from being pureed in an alien Cuisinart, you'll battle your way through a massive cybernetic alien spaceship that scoffs in the face of the laws of physics. At the flip of a switch the floor or wall will become the ceiling; everything shifts and rotates. Step through a portal and you could be transported anywhere, from a few feet to miles away - you can even shoot yourself in the back if you're not careful. It's disorienting as hell, but it keeps things very interesting. The puzzles incorporate these tricks, forcing you to consider solutions never before possible to reach your goals.

Tommy is visited periodically by the spirit of his grandfather, who teaches him the ways of his Cherokee warrior ancestors. These skills - the ability to leave your physical body to pass through barriers and scout ahead, reviving yourself where you were killed by battling damned souls and summoning a spirit hawk buddy to distract enemies and translate alien text - rank up there with Batman's utility belt. Also in your bag of tricks is the Leech Gun, which siphons different kinds of ammo from ports on the walls. Depending on what it's loaded with, it'll fry, freeze, zap or blast your enemies.