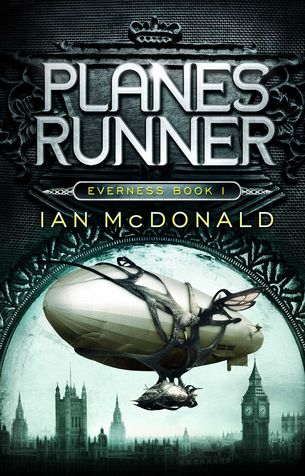 Curious how subgenres suddenly blossom within SF. The idea of the multiverse, the notion that our reality is just one of many, has long fascinated writers, yet lately it’s seemed to gain real traction as the likes of Iain M Banks, Paul McAuley, Stephen King and Terry Pratchett/Stephen Baxter have conjured fictions that rely on the idea of jumping between realities.

Now Ian McDonald enters the fray - but not McDonald the writer of dazzlingly complex near-future SF-thrillers set in the developing world, such as River Of Gods . Rather, Planesrunner is the first offering in a Young Adult sequence, Everness.

The book begins with its young and likeably geeky protagonist, Everett Singh (named for physicist Hugh Everett, who came up with the many-worlds interpretation of quantum mechanics back in the ‘50s) witnessing the kidnapping of his scientist father. But why would anyone want to drag an apparently unimportant academic off the street in London? Because, it turns out, Singh Sr has created the Infundibulum, a map of all known parallel Earths.

Soon, Everett heads through a gateway and into a steampunk-tinged adventure. And yes, an airship is involved. But don’t hold that against McDonald, because this is a novel that’s knowing in the way it uses SF tropes without ever coming close to being condescending towards its intended audience.

Science nerds of all ages may balk at the amount of exposition in the early chapters (arguably necessary, considering we’re talking quantum here), but most will be too busy getting lost in a cracking adventure story.