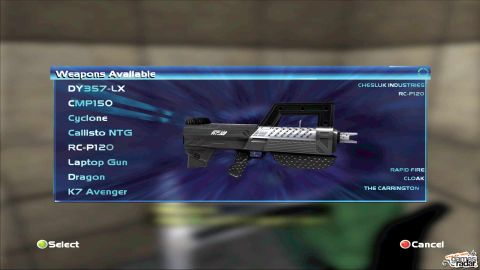 The N64 would have died if it had tried to run this. The colosso-textures and 1080p resolution would have pushed its tiny graphics processor from room temperature to boiling point in seconds and Nintendo’s curvy box would have melted like a candle.

Of course, the N64 could barely run Perfect Dark the way it was either – even with the RAM booster pack it chugged along at about 20 frames per second and dropped to single figures if anyone dared make anything explode. The last truly great N64 game was too ambitious for the console to handle, but we loved it despite the creaking tech powering it – and somehow those framerates and smeary textures never registered as a problem. This then is Perfect Dark the way it was meant to be played and the way it existed in our heads – smooth, clear, and razor-sharp... but ten years too late.

On the one hand there’s nostalgia. This is Perfect Dark: the same 20-level campaign, the same brilliant sci-fi weapons, the same stirring tunes, and the same massively complete multiplayer mode with split-screen and bots and now full online functions. It’s an irresistible package for anyone who was playing games at the time; it’s the chance to return to a world in which we lived. Every minute of the summer of 2000 was spent locked in four-player deathmatches with friends and conquering that campaign. Every N64 owner has their own Perfect Dark story – the pre-orders, the lengths they went to get a copy on release day, the expense of the expansion pack, the gunfights with friends, unlocking every last cheat. It was a special game, not least because it was GoldenEye’s only real sequel and a fond farewell to a console we loved. Perfect Dark was one great game.

But on the other hand, there’s reality. And reality turns out to be a big, fat son of a bitch. Perfect Dark was released just one year before Halo changed the rules for console shooters and while Halo has endured Perfect Dark has been weathered by the decade. That campaign you loved is a wander-‘em-up with levels which leave you lost and AI which hides in filthy places to pop you in the back.

They’re shoeboxes, not sandboxes – all tight corridors and purposeless rooms, with instant fail states on almost every stage for doing the wrong thing at the wrong time. Those guns which made you feel like such a badass are powered by such decisive auto-aim the enemies need only be on screen for you to land a perfect shot to the chest. Even at the time the plot took a kicking from critics but the alien conspiracy nonsense seems especially dumb (and dated) ten years after The X-Files ended.

And the multiplayer mode we all loved so much? Well, it’s still good thanks to those clever gimmicky weapons and cramped maps, but you can do better on the 360. Like everything else, Perfect Dark’s multiplayer has been bettered in the years since. The appeal, instead, is in the gimmick weapons and the chance to revisit Goldeneye’s Facility map – still a favourite in spite of its bottlenecks and simple linearity.

Perfect Dark is a conspicuously aged game; many years older it seems, than Halo, and somehow even older than the less ambitious but more solid GoldenEye from four years earlier. But if you were there at the time, if you queued with us atthe game storeand claimed your pre-order, if you remember that summer’s multiplayer bloodbaths at a framerate you never realised was bad, if you can hum the Carrington Institute’s pause music without even thinking - you simply have to get hold of this revival of Perfect Dark, no matter how sadly imperfect it is today.