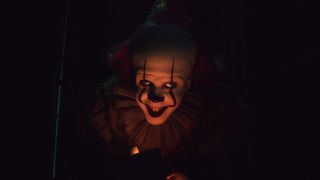 When It Chapter One opened in 2017 to much buzz, it went on to become the highest-grossing horror film of all-time, instantly guaranteeing that a sequel would be on the way to finish the job of adapting Stephen King’s ginormous tome for the big screen.

The first film, set in 1988-9, saw the residents of Derry, Maine, terrorised by ‘It’ - the terrifying, often clown-shaped transdimensional being capable of reflecting his victims darkest fears back at them. It most frequently takes the form of Pennywise, The Dancing Clown (Bill Skarsgård), and scares up a bunch of outcast kids who gang together to form the Losers’ Club.

While the kids manage to see off It at the end of the first film, he returns to Derry every 27 years, meaning that the now grown-up Losers’ Club are going to have to reunite and face their fears again.

You can see an exclusive look at the film below, courtesy of our sister publication Total Film magazine, whose new issue features It Chapter Two on the cover. As well as a terrifying glimpse of Pennywise in a hall of mirrors, there’s also a new look at the reassembled, 27-years-older Club, and the adult Beverly (now played by Jessica Chastain). Check them out below now:

Inside the new issue, Total Film goes on set of It: Chapter Two and speaks to returning director Andy Muschietti and his cast. Muschietti stresses that it was important for the characters to be recognisable after the time jump, so casting was key, especially as the younger cast will reappear in flashbacks. James McAvoy plays Bill (formerly Jaeden Martell) and Bill Hader is Richie (formerly Finn Wolfhard). Chastain, who starred in Muschietti’s first film, Mama, had long been the first choice to play the older Beverly (formerly Sophia Lillis).

“It was even before releasing the first one,” Muschietti tells Total Film. “The [box-office] tracking was good, so we started talking about doing the second one before it was released, and, in a vaguely unofficial manner, we screened the movie to Jessica. She liked it and she was in immediately. She spilled her wine at one of the scares, so it was a success!”

It Chapter Two opens in the UK and US on September 6, and you can read much more about it in the new issue of Total Film magazine, which is on sale this Friday, July 26. It features an in-depth on-set report and exclusive cast and filmmaker interviews. The issue is a must for film fans because it also comes with a special supplement celebrating the films of Quentin Tarantino, to mark the release of Once Upon A Time… In Hollywood.

If you’re a fan of Total Film, why not subscribe so that you never miss an issue, and you’ll get exclusive subscriber-only covers like the one below, delivered directly to your doormat before the magazine hits shelves? What are you waiting for? We’re currently running a subscription offer where you can subscribe from as little as £12.25 every three months, and you’ll also get five blockbuster movies to run from Rakuten TV (which you can watch on any supported device including Smart TVs, consoles, tablets, smartphones and more). Head to My Favourite Magazines now to take advantage of the offer. (Ts and Cs apply).