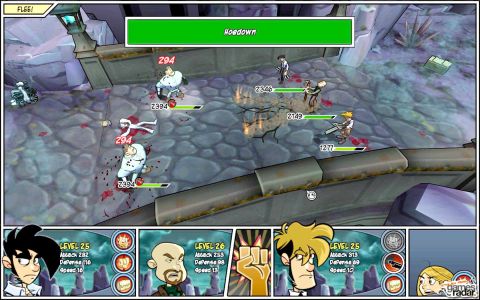 Picking up where the first episode concluded, the second episode of the Penny Arcade Adventures begins with your still-homeless character (you can either import your old character or start a new one at the same advanced level) brandishing a new gardening implement and teaming up once again with 1922-era Gabe and Tycho to track down the giant robot that crushed your house. Episode II is a slightly longer run, around five hours, and is packed with a greater concentration of adventure-style puzzles punctuating the unchallenging RPG-style turn-based combat.

This chapter’s bizarre story unfolds throughout a very linear adventure structure - even though you have lots of (often intensely profane) dialogue options and can choose which location to travel to, very few things can be done out of sequence. On the other hand, very little content from the last game is recycled, so Episode II is an almost completely new adventure.

The most notable improvement over the previous episode is that none of the minigames used to charge up your team’s special attacks require button-mashing as fast as you can. The new games are all about timing, like Gabe’s Guitar Hero-esque game that results in a flurry of devastating punches. But with the exception of the robot monkey fight, this episode just isn’t as laugh-out-loud funny as the first, and there’s a shortage of memorable new characters. The finale, however, is excellent, and has the feel of an epic battle. Episode II isn’t a great starting point for newcomers, but continues to be worthy of PA fans’ time.