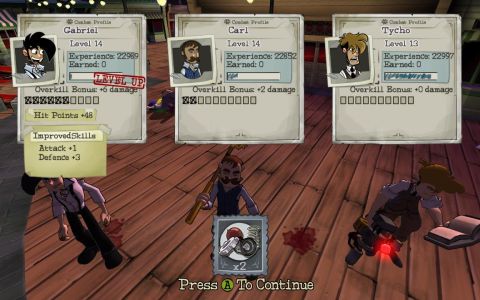 Loosely based on the popular web comic Penny Arcade, this new episodic series kicks off with a six-hour game, cheekily subtitled On the Rain-Slick Precipice of Darkness. The action follows your custom-built avatar (and his disappointingly limited wardrobe selection) and early-20th-century versions of heroes Gabe and Tycho as they investigate paranormal goings-on in the city of New Arcadia. It’s a bizarre tale that’s completely unrelated to the comic’s setting, but bizarre is what Gabe and Tycho do best. On the plus side, the game doesn’t require any prior knowledge of the comic characters or their back stories, but, on the other hand, it doesn’t take advantage of the comic characters’ back stories, either. The writing has the same witty, often-crude edge to it, and Gabe’s thick-headedness remains a perfect foil for the esoteric Tycho. If you appreciate Penny Arcade’s humor, you won’t be left wanting for laughs here.

In fact, Penny Arcade RPG-Lite would’ve been a more accurate title. There’s some classic adventuring to be had in the city of New Arcadia, such as clicking on the scenery to hunt for objects and see amusing environmental descriptions, but the bulk of the game is combat. It’s a simplified version of modern Japanese RPGs: non-random encounters, real-time battles with recharging abilities, using buffs from your inventory, and summoning support characters from off screen. The gameplay isn’t complex, and if you have experience with this kind of combat, it’s easily mastered well before you reach the end. And thanks to the game’s episodic length, it also has the virtue of ending before becoming tedious. Adding a little skill (though not exactly depth) to combat are minigames that determine the amount of damage inflicted by each character’s special move. The games for Tycho and your character are mildly entertaining, but hammering the space bar to power up Gabe’s punches made me want to punch something myself.

Of course, the real star of PAA isn’t the gameplay, but the humor. It’s a lot like playing a comic strip, and should be approached as such. Read a few of the strips online before plunking down your money - if you like what you see there, the game is worth the price of admission.