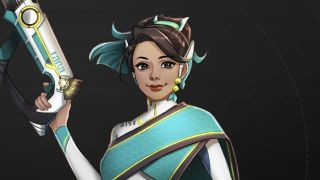 The Overwatch community is filled with some of the most creative people on the planet. Case in point: this week, Thai computer arts student and Overwatch fan Weerawan Mapithak shared an original hero concept - a project she'd been working on for her Master's degree - on the Overwatch forums. And uh... wow. Meet Tara:

Mapithak, who goes by the handles RM-Parfait and Purrfait, says the character's design is based on Siamese fighting fish (though you might be more familiar with their other name, "betta fish"). Were she a real character in-game, she'd be of the Support class, using abilities like Bubble - which locks an enemy in a sphere - and healing drones to support her allies.

Mapithak took the concept even further, going so far as to draw up a map for Tara...

And a few alternate costumes, including a Halloween skin.

The thread where Mapithak posted her work currently has more than 500 replies, many of them calling on Blizzard to hire her and/or make Tara official. Even game director Jeff Kaplan couldn't help but take notice and commend the work. "Wow, this is amazing," Kaplan wrote on the forums. "You are so talented!"

Yup, senpai noticed her. Not many can say that. Way to go!

To see more of Mapithak's work, check out her online portfolio.