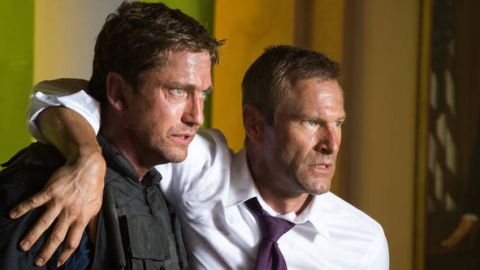 On the one hand, Antoine Fuqua’s Stateside hit is soul-sapping, jingoistic nonsense, an ultra-violent fireworks display that will play like a prophecy fulfilled for those prepping for doomsday.

On the other hand, it’s ludicrous enough to be (almost) enjoyed as an inky-black comedy. The prologue sets up our sad-sack protagonist, former secret-service agent Mike Banning (Gerard Butler).

We’re on a trip to Camp David, where the President (a hapless Aaron Eckhart) and his family encounter an icy road and careen off a bridge.

Banning manages to rescue the prez, but is unable to save the first lady (Ashley Judd).

Fast-forward 18 months, and the still-shaky Banning is working a desk job at the treasury department when North Korean terrorists, disguised as tourists, launch a full-scale attack on the White House, utilising an old US bomber equipped with Gatling guns and, inexplicably, some kind of space-age force field.

Once the dastardly interlopers get inside, the President and his staff are held hostage, beaten and/or executed one by one in an attempt to secure clearance codes that will detonate all of the States’ nuclear weapons, effectively wiping the country from existence.

Literally the only man keeping the US from utter and total destruction is the redoubtable Banning, the only man left alive to skulk around the White House and save the President.

With great economy and a surprisingly straight face, Olympus Has Fallen sets up this preposterous premise in just a few short scenes, allowing the Die Hard -in-the-White-House antics to flow freely.

From there, Butler’s steel-jawed desk jockey simply channels John McClane with more brawn and less humour, trading in Bruce Willis’ cocky charm for brute force. Meanwhile, Fuqua ( Training Day ) offers few stylistic flourishes, but he does show an unflagging enthusiasm for setting off one incendiary device after another.

Luckily, in spite of its relentlessly grim tone, proceedings turnso cartoonish that it becomes easy just to sit back and giggle when, for example, Butler outruns a helicopter…