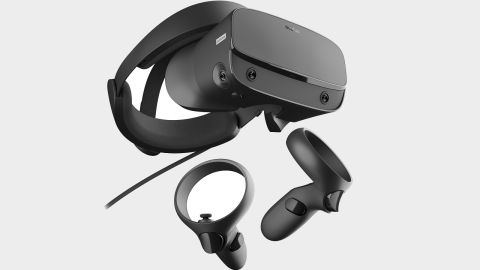 Oculus is in a curious position, where it's not only competing with other market leaders (notably HTC's Vive, PSVR on the console side, and Valve's upcoming Index) but also with itself. Facebook's VR offerings, when they're all widely available, will run the gamut from inexpensive and standalone (the Go), capable and wired (the Rift family), and high-end standalone (the Quest). Having discrete offerings at different price points is obviously an advantage, but the potential difficulty comes when you've got multiple devices at or around the same price with little to differentiate them. These are already-muddied waters that the introduction of the Rift S further clouds.

Like the Rift before it and the upcoming Quest, the Rift S is priced at $399 / £399, which would be a clear win if it was a convincing upgrade over its predecessor. But given how iterative it is, and the fact that the base Rift is regularly available on sale for much less, it starts to look less like a replacement and more like competition.

That's not to say the Rift S isn't a clearly better headset than the original Rift in certain ways. The most notable is the five cameras mounted around the HMD, which not only provide inside-out tracking but also enable Passthrough+, allowing you to see the room around you through the cameras without having to remove the headset.

Passthrough+ is a nice quality of life improvement, but the star of the show (and of the Rift S as a whole) is the inside-out tracking. It makes the entire unit less cumbersome and, as a result, less likely to end up tucked away in a closet collecting dust. For full-room scale, the original Rift required three sensors, each of which took up a USB port, as well as a fourth USB port and HDMI port for the headset, and a veritable snake's den of cables. By trimming off the sensors the Rift S only requires a single USB 3.0 port and a DisplayPort, dramatically reducing setup, the number of filled ports on your PC, and clutter.

The tracking was mostly pretty reliable, though I did encounter several instances where, when my hands dropped to my sides, the headset lost track of the Touch controllers. Said controllers are still some of the best in the game, more ergonomically designed than the original models and only requiring a single AA battery for power. When they were clearly visible to the headset the tracking felt nearly flawless; one-to-one fidelity that's some of the best I've experienced.

The resolution has also been improved, up to 2560 x 1440 from the original Rift's 2400 x 1080 (though still not as high as the Quest's 2880 × 1600 display). Unfortunately, the lenses are fast switching LCDs instead of the original unit's (and Quest's) dual OLEDs. Plugging in my original Rift and comparing the visuals in games like Robo Recall and Moss immediately after experiencing them in the Rift S made the minor difference in clarity and much reduced screen-door effect noticeable, but without that immediacy I would've been hard pressed to call the Rift S resolution superior. Unfortunately, the more apparent difference was in contrast, with deep blacks on the original Rift's OLEDs looking much darker and more clearly defined. The refresh rate on the Rift S has also been downgraded, from the original's 90Hz to 80Hz in the S, though even on a very high-end PC, the iBuyPower ELIBG207, the minor FPS loss wasn't hugely affecting.

One area where the Rift S is a clear step forward from the base model is in fit and feel. Even though the headset is 20% heavier than the original, the weight has been distributed across it so that it's significantly more comfortable to wear, especially if you plan to be immersed in virtual realms for several hours at a time. The tension wheel on the back of the unit and centerline strap on the top allow you to adjust it for the perfect fit and secure it firmly in place, and even with glasses on I didn't suffer from raccoon eye rings imprinted on my skin after playing with the S for almost two and a half hours.

The Rift S forgoes over-ear headphones for open mini speakers built into the HMD - another example of a design iteration that's neither a clear win nor a step backwards. On the one hand, it allows you to hear the environment around you clearly if you're in a space where you're likely to be interrupted; but on the other, the open design means the immersion in a virtual world can be more easily broken, lessening the experience when that happens. There is a 3.5mm jack if you want to add your own headset, but that's more gear and wires to strap to your dome, and overall I found I preferred the original Rift's audio solution.

The Rift S has also done away with a hardware based interpupillary distance (IPD) solution in lieu of a software calibration tool. This has raised some concerns about how well a software tool will be able to adapt the display, particularly for people with IPD on the extreme poles. While I can't speak for those edge cases, for me, the software solution was more than adequate, and I didn't miss another hardware setting to tinker with and repeatedly adjust.

The Rift S maintains compatibility, broadly speaking, with the original's library of games and experiences and can also access HTC's Viveport subscription service, which offers more than 600 VR titles for a $12.99 / £12.99 monthly or $99 / £99 yearly fee. (Though currently this is tempered by HTC's offering Rift S owners a two-month free trial of the service). Practically speaking, this means that the Rift S is home to one of the broadest VR libraries on the planet, but then so is the original Rift, and it still lacks some of the most highly-lauded VR titles available which live exclusively in PlayStation's ecosystem.

The Rift S package is difficult to recommend without caveats. If you own a capable gaming PC, don't mind spending a little extra (compared to the original Rift), and you prize the convenience of inside-out tracking but aren't fully sold on a completely standalone solution, the Rift S may be just the headset you're looking for. It's a much tougher sell for owners of the base model, for those committed to our wireless future, or for anyone looking for the highest fidelity experiences VR has to offer (a space dominated by the Vive Pro and, in all likelihood, the forthcoming Index). Three years out, my hope was for an Oculus HMD that mirrored Microsoft's strategy with the Xbox One X, a hardware refresh that was undeniably better in every category than the original offering. Instead, we get a strangely-timed half-step that advances the hardware in some categories but is demonstrably worse in others.