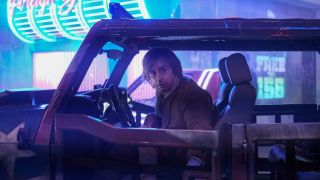 This morning I watched Mute, the new sci-fi mystery film from Moon and Source Code director Duncan Jones. And I rather liked it. I certainly liked it more than some did, anyway. Though it’s not perfect by any means. For all of its increasingly ambiguous character work and delicious, deceptively layered world-building (this is a movie you’ll want to still-frame every time a TV news report, newspaper front page, or scribbled note appears on screen), its central mystery unravels into a fairly hackneyed and familiar conclusion toward the end, punctuated with a slightly problematic cliché that the film, oddly, seems to entirely acknowledge it’s committing.

There’s also surface level over-familiarity in Mute’s Blade Runner-inspired cityscapes, particularly coming off the back of Blade Runner 2049 and Netflix’s own Altered Carbon, though at street level the distinctively European vibe (this is future Berlin, not LA) gives the film a much more bespoke personality. Spinning off from that, those looking for the hardcore cyberpunk science fiction seemingly advertised by its aesthetic are going to be disappointed that Mute’s central tale isn’t really a sci-fi story at all, despite being resolutely set within a future world extrapolated from our own. But here, we also spin into the thing I liked the most.

You see Mute, fundamentally, is a small, intimate, human-focused detective story that could easily play out in the present day with one or two minor tweaks. Not that hard sci-fi can’t be human. Quite the opposite; the whole point of science fiction is to extrapolate the human experience in order to explore it on an exploded scale. But sometimes it’s nice just to dig into a more personal little slice-of-life inside an interesting, extravagant world, and Mute (mostly) does that pretty well.

What does it all mean?

6 questions I have after watching Netflix's Mute

Mute’s central conceit is that its protagonist, Leo, as well as being unable to speak, is Amish. He is a man in a science fiction city who avoids using digital technology whenever possible. When he has a mystery to solve – which, in the case of his missing girlfriend, Naadi, he definitely does – he does so the old-fashioned way, with paper, pencils, phone books, and a total avoidance of GPS during car chases. It’s a promising idea that the film doesn’t completely follow through on, allowing it to become more of an affectation than a plot device as its story progresses. But its essence looms throughout, at least in the abstract. This might be a world of cybernetic prosthetics, flying cars, drone-powered fast food takeaway, robot strippers, and chrome-domed sex-bots, but Mute doesn’t really concern itself with any of them, preferring to focus instead on the people this tech sits around.

Okay, so Mute does address the robot strippers and sex-bots on a couple of occasions, but only to roundly mock the whole idea of their industrial-looking, entirely unerotic existence, making their inclusion far less eye-rolling than it first seems. But getting back onto my main point, where something like Altered Carbon (and when I say ‘something like’, I mean ‘specifically’, because it’s impossible to not draw direct comparisons given the timing) is, to varying degrees of effectiveness, built entirely around its central sci-fi conceit, with all plot points and ideas stemming directly from it, Mute really only cares about its characters and giving them room to grow.

While Leo might barely make a sound, the likes of Paul Rudd’s Cactus Bill and Justin Theroux’s Duck are rich and nuanced enough to carry entire TV series on their own, let alone movies. Unveiling new, often contradictory depths right to the end of their arcs, and never settling into entirely comfortable pigeon holes, regardless of their positive and negative extremities, these two alone pack more character detail and development into two hours than Takeshi Kovacs manages in more than five times that. Because in Bill, Duck, and their interactions with each other and – increasingly – Leo, we have three parallel but entwined stores that are fundamentally concerned and driven by the personalities at play. Nothing else is allowed to get in the way.

In a show that emphasises the ‘science’ part of science fiction though, things can get messy if not treated with utmost care and finesse. While Altered Carbon’s first half, for instance, does a good job of setting up an interesting mystery requiring a full exploration of the central, body-swapping ‘Sleeve’ technology to solve – as well as discussing that tech from a whole bunch of different, socially emergent angles – that’s about all it has room to do. The storytelling largely has to take the form of running from location to location, punching dudes, and getting punched. Kovacs might move between bodies and realities a lot, but he rarely moves as a person.

So, we have two superficially similar Netflix productions that ultimately end up almost as opposite-world mirrors of each other. One under-uses its sci-fi setting slightly, and lets its mystery somewhat fizzle out, but ends on a solid emotional hit thanks to the space left for character along the way. The other maintains a strong mystery (at least in terms of twisty, turny mechanics), but loses the run of itself amid all the Sleeves, Virtuals, and needlecasts it has to play with, ultimately delivering a confused deflation of potential.

Of the two, I certainly prefer Mute, though I’d like to see another film from Jones explore its wider sci-fi world properly. But I suppose that caveat is also the confirmation. Despite missing out on the expanded, techno-reality of Mute, I wanted to stay for the duration, and now that my time with its characters is over, I know there’s more out there to see. There’s more to explore with Altered Carbon too, but I won’t be excited about a return visit until I’m sure there’s someone interesting to share it with.