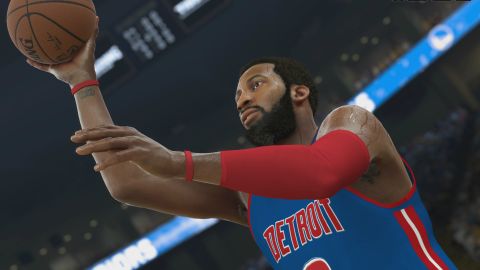 NBA 2K17 is once again a strong, diverse title that beautifully represents the style and culture of professional basketball and caters to a number of play styles.

For the better part of a decade - certainly since the explosively popular cultural touchstone that was NBA 2K11 with its legendary Jordan Challenge mode - 2K Sports’ NBA franchise has been the gold standard of sports video games. Only PlayStation exclusive MLB The Show has come close to matching its consistent quality, depth, intelligent gameplay, and presentation. While FIFA generates more money due to soccer’s massive worldwide popularity and Madden appeals to a larger North American audience thanks to the NFL’s broad market impact, NBA 2K is at the top of any legitimate sports game power ranking.

NBA 2K17 only bolsters that reputation.

While it may not introduce an over-the-top new mode, NBA 2K17 delivers an incredible amount of content and a diversity of gameplay with a high level of quality that is unmatched. Building upon efforts to make its core gameplay even more authentic, creating social experiences that highlight individuality and comradery, yet allowing new (or those who aren’t interested in participating in that social world) players to follow their own path via single-player modes, NBA 2K17 can be genuinely enjoyed by anyone and everyone.

It’s no hyperbole to say that it’s really four complete games in one - each with its own unique characteristics and features, joined by a common thread of a love of the culture of hoops. “Traditional” 5-on-5 hoops fans can sink their teeth into online or offline leagues via MyGM and My League, choosing to experience the NBA as it stands today or create their own customized world with varying numbers of existing or “fantasy” teams. Players looking to experience a story focused on an up-and-coming rookie and his relationships with coaches, real (and imagined) NBA players, and family members get to explore MyCareer. The Park enables you to customize and level up your individual player and compete with and against friends in an evolving MMO-like world. Meanwhile, people looking to build a fantasy team from scratch via Ultimate Team-style card collection, and take it online to climb leaderboards and battle others, have MyTeam.

That’s just for starters. Not only is NBA 2K17 massive in scope, it looks and sounds great throughout. Seemingly every presentation detail is polished to a high sheen, including top-notch visuals introducing and tracking the action as well as an astonishing amount of excellent pre-game, play-by-play and sideline commentary from a large group of real-world NBA analysts. Beautifully-lit arenas pulse with crowd reactions, sneakers squeak as players run around the court, and pumped-in sounds of music snippets permeate the air. The atmosphere for games is simply electric.

One of the reasons that NBA basketball is so popular is the individual attributes of its stars, from Steph Curry’s gorgeous jumper to LeBron James’ otherworldly physicality. NBA 2K17 represents each of its subjects admirably, in both appearance and play. As you come to grips with who you’re controlling - whether you’re at the helm of a team in a traditional 5-on-5 experience or controlling a single avatar in your Career and/or at the massively multiplayer Park - those idiosyncrasies shine through. Each player has specific jump shots and free throws, for example, with their own timing to master. On one hand, the simulation and depth of these is incredibly impressive; players truly “come alive” because of these details. On the other hand, it can be daunting to learn the impact of these differences, especially when you’re in the heat of battle and have to internalize how to time your shot based on who you’re using and where they are on the court.

Therein lies NBA 2K17’s true dichotomy - the beauty of its inherent “sim” level of realism that flows through its core also puts significant demands on the player. Unless you’re playing on the absolute easiest settings, NBA 2K17 plays true to the sport and offers a seemingly unlimited array of control choices and options that can be utterly incomprehensible to newcomers. There are layers upon layers; each individual player has dozens of dribble moves, pass types, and shot options, while teams have dozens of plays that they can run in real time. Specific strategies can be executed based upon the situation, from playing lockdown defense on a targeted opponent player late in a tight game to running and gunning on offense to exploit weaknesses.

Some may lament the difficulty curve of NBA 2K17. That’s missing the point, though. NBA 2K17 invites players to learn how to play the game at whatever pace they choose, and to whatever level they like. It is entirely plausible that you can spend an hour or two learning basic moves and strategies with a single Google search and a bit of practice, then be off to the races enjoying a season with your favorite team. However, truly learning the details of various offensive strategies and playcalls, understanding and exploiting individual player strengths, and executing pick and rolls, screens, and motion unlocks an entirely new - and extraordinary - level of play that is based on the true fundamentals of professional basketball. Rarely has the payoff of time and effort been so high in a sports video game. T

hat’s not to say NBA 2K17 doesn’t have its problems. While the core gameplay plays better than last year and feels smoother, and the AI doesn’t feel cheap, I’ve noticed some strange behaviour at times. I've had the CPU bring the ball just over the half court line and sit there and get five seconds called on them multiple times in a row. The camera cutaway will sometimes show some weird part of the court where absolutely nothing is happening. This also happens during halftime highlight reels. Back to back “3 seconds” calls have happened to me twice over the course of a six-game stretch early in one of my seasons. Much of this is likely to be cleaned up in one or more patches, but they’re present at this time.

In-game virtual currency that can be purchased with real-world dollars (called VC) is also intertwined in the fabric of the NBA 2K17 experience, as it has for several years. No mode is spared impact, although it’s entirely plausible to enjoy the bulk of the game without feeling the need to spend additional money to move forward. MyTeam is the one area where spending VC is key; while it’s possible to use the numerous single-player challenges to build up currency, spending real dollars to get better cards, players, and powerups called ‘consumables’ is heavily promoted.

NBA 2K17 continues the theme of excellence that has made the series so popular. It’s slick, smart, and deep. It is the model that all modern sports video games should aspire to be, appealing to virtually every type of player and fan.

NBA 2K17 review: "The model that all modern sports video games should aspire to"

NBA 2K17 is once again a strong, diverse title that beautifully represents the style and culture of professional basketball and caters to a number of play styles.