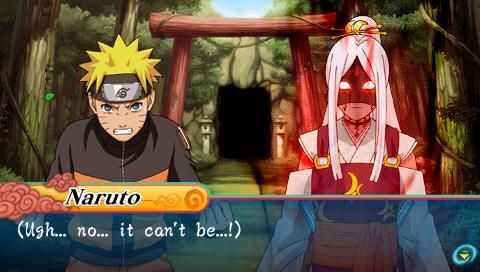 The appetite for Naruto games from fans of the boy ninja's series seems to be absolutely insatiable. Despite the fact that the countless sequels and spin-offs fail to add anything other than a few token features, they just keep on coming…

That’s not to say that Naruto Shippuden: Ultimate Ninja Heroes 3 doesn’t boast impeccable production values and mountains of content and unlockables; as another piece of collectible fan service, the game will no doubt prove irresistible thanks to new additions including the characters Young Kakashi and Obito Uchiha, and re-telling the Hidan and Kakuza story arcs. You also have the option to take part in four-player battles or three-player co-op for selected sections in the story mode.

If you’ve yet to play an Ultimate Ninja Hero title, the meat of UNH3 is the Master Road mode. Here, you’ll unfold the story through a series of short, side-scrolling levels or simplistic button-mashing beat-’em-up fights. Along the way you’ll collect Ninja Points, which can be used to purchase tactics upgrades and movies to play back.

To the casual observer, UNH3 might give the illusion of depth and variety. To the cynic, it feels like an awful lot of fluff without much in the way of gameplay substance. Sure, this latest dose of Naruto might keep you busy for a number of hours, fingers hammering at the PSP – but whether that time can be considered constantly entertaining is much more questionable.