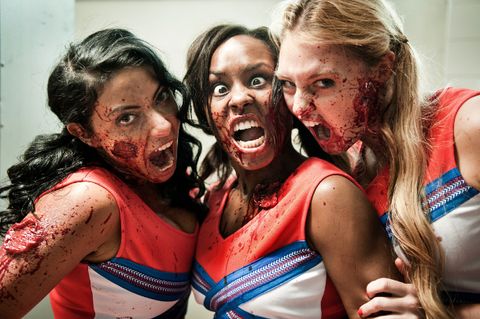 The One Where: Zombie cheerleaders terrorise the community centre.

Verdict: It’s hackneyed hyperbole in TV land to describe a show as like watching a mini movie every week, but in the case of Misfits series three’s penultimate episode that description is entirely justified. Not just because of the grainy, washed out cinematography or the kinetic handheld camerawork – they’ve been part of the show’s signature style from the very beginning – but also because of the slow build structure of the story which teases and teases before erupting into a shower of blood and miniskirts.

As a result, for a zombie episode there’s surprisingly little actual zombie mayhem – but that’s what makes it work so well. Their fleeting appearances are used to punctuate moments of dramatic tension, provide comic relief (the sight of Mr Miggles lapping up blood from the gaping a hole in Maggie’s cheek is about as black as comedy gets) or offer up the grisly thrill of seeing a dead head’s melon caved in by the business end of a baseball bat. Repeatedly. As you might expect, Misfits ’ zombies are also used in an entirely unexpected way – providing a tragic coda to Seth’s relationship with Shannon. One scene where he stands over her, hammer in hand, as she “sleeps” and he struggles with his colossal mistake is a smart moment of visual storytelling.

In lieu of a through line as clear as series two’s Superhoodie arc, several of this series’ running plotlines culminate in satisfying fashion this week. As well as the Thamesmead Avengers solving a problem together for what feels like the first time in ages, it also feels like the most balanced episode of the series – every character gets their moment to shine, but none more so than Rudy who’s bizarre explanation about why he hates f***ing cheerleaders is fabulously wrong.

Cornetto Watch: After last episode’s grievous oversight, the Cornetto returns with a vengeance this week, playing a crucial role in the scene where the gang visit Maggie’s. Maybe they got it all wrong and Maggie wasn’t jonesing for Rudy’s grey matter at all, some people are just crazy for Cornettos.

LMAO: Rudy’s ludicrous sledgehammer is a standout moment, but the award for funniest moment of the week (aka The Award For Rudy’s Best Moment) goes to his reaction after drawing the long straw. Talk about a sore winner.

Behind The Scenes: Regular readers of SFX might recognise this week’s episode as the one we reported from for our season three feature in issue 215. Here are some fun facts from the day: the shot where the stunt double dives out of the tiny window in the door took four takes (Gilgun missed his mark, the cue came to early and a light went out mid-take), the actress who Rudy hits in the face with a baseball bat (Iskra Lawrence) had a leg injury but carried on like a trooper and Gilgun thought the storyboards for this episode made him look like Tintin (or “That retard with the slanty eyes”).

Death sentence: Forget ice road trucking or crocodile wrestling, in the Misfits -verse “probation worker” is clearly the most dangerous profession in the world. And the gang know it too. Self referencing jokes are fine, but Misfits is getting very close to becoming too arch and knowing. How long can it possibly be before they’re all hauled away?

Best Lines:
Simon: “ He wants blood”
Rudy: “Lets get him a mouse and let him chow down on that little fucker.”
Simon: “And then we’d have a zombie mouse as well.”
Rudy: “This is just getting like a… zombie Noah’s Arc.”