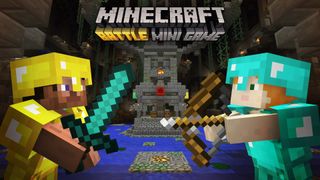 Minecraft on consoles is the closest its ever been to PC in terms of features but there's always been a few options that mean PC has had the edge over its under TV counterparts. Multiplayer activities such as Hunger Games-style battles have only ever really been possible by logging onto a dedicated server or spending a lot of time making your own rules. Until now, that is. Minecraft's new Battle mode is a PvP multiplayer game that's coming to the console edition for free this June.

"It’s a last-Minecrafter-standing deathmatch and the first of a number of mini games we’ll be releasing, designed to help players compete under cool and crazy rulesets with minimum fuss," explains Mojang's Marsh Davies on the official site. "Our mini games will give you a helping hand, dropping you straight into the fun without the need to mess around with manual countdowns, laboriously prep loot chests or keep score."

Each of the three arenas will have unique perils and plenty of chests of weapons and loot to help you stay alive as long as possible. "We’ve made the mini game specifically with console players and couch-based competition in mind: it supports up to four players in splitscreen and eight players online, either by invitation or using the in-game matchmaking system," explains Davies.

"We wanted it to be super-accessible and fast-paced, so we’ve tried to keep the focus on rapid tactical thinking and combat: there’s no need to craft anything here, and you can loot inventories and equip armour with the tap of a button." It's great to see a focus on couch multiplayer here and there's three maps coming out for free in June. In future new map packs will be available to buy for $2.99.