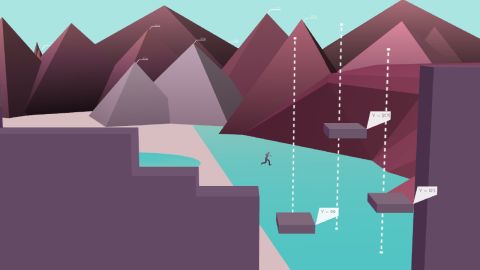 I can't pretend to know how hard it must be to design a puzzle game. You have to constantly walk a thin line between two extremes, trying carefully not to make obstacles too simple to solve (and therefore unrewarding), or too difficult, resulting in brain-busters that might bring players' progress to a full stop. What I do know is that playing Metrico is a ton of fun--until you get stuck. In that moment, you suddenly forget all of Metrico's unique visuals and mechanics, because all you can focus on is your frustration.

Every aspect of Metrico's presentation is clean and simple. The atmosphere here hinges entirely on the creative backdrops, which look like giant infographics that react to your every move. Its an appealing look, which manages to make the mundane pie charts and bar graphs that occupy all the puzzles look like space-age technology. When you're not admiring the environments, your ears will enjoy the great synth-heavy tunes and subtle rhythms that sound like the score to a 1980s instructional video.

At the onset, you simply pick a gender, watch your new avatar drop into a completely blank level, and try to figure out what to do next. Levels boil down to a progression from point A to point B, as you're constantly looking for ways to proceed from left to right. Running and jumping is intuitive; the tricky part is figuring out how to manipulate your surroundings using the touchscreen, rear touchpad, and camera to create a path to the next puzzle.

Not once does Metrico nudge you in the right direction, and there's no in-game hint system to help you out of a jam. Knowing that you're completely on your own is refreshing at first, and you feel like you have the freedom to decipher solutions at your own pace. Unlike some puzzle games, Metrico never feels like it's insulting your intelligence. That's encouraging when you're cruising through puzzles right out of the gate--but once you actually start wishing you had a helping hand (besides online guides), Metrico unwillingness to assist you will feel more like a weakness than a strength. A good puzzle game gives you other options when you can't figure out a solution to the challenge at hand, letting you come back to the difficult obstacle later with fresh eyes. But if you get hit a roadblock in Metrico, you're literally stuck; there's nothing else to do and nowhere else to go.

This problem is exacerbated by how the puzzles function: your movements control the environment, but never in any consistent way. Maybe you raise a pillar by only running to the left; maybe the way to extend this platform is jump up and down a bunch of times or shoot a wall. You never know which actions will allow you to progress until you try them. Like the lack of instructions, this initially feels very freeing and playful. But as the puzzles increase in complexity, it can be tiresome to try and decipher which motions will or won't be relevant to the obstacle at hand. There will be times when you have no idea why you were able to overcome an obstacle, or resort to randomly pressing buttons until something works.

Even if later puzzles feel like a test of your ability to stumble into a solution, Metrico also has some moments of pure brilliance. One of the levels utilizes the Vita's motion sensor for all three dimensions, which is mind-bogglingly cool; onlookers will think you're a crazy person as you spin, tilt, and turn your Vita while still attempting to control your character. Another world uses the Vita's camera to capture colors; the amount of blue, green, or red the camera picks up determines how the level moves. This mechanic caused me to physically get up and wander around my room in search of brightly colored objects, something that I've never had to do while playing a video game until now. Of course, there may be times when you don't really feel like doing these things, or simply aren't able to--yet they're the only way to progress through the completely linear sequence of puzzles.

And that sequence doesn't last long. Metrico is over in two to three hours, depending on how often--and how badly--you get stuck, and there aren't any collectibles or secrets to encourage a repeat playthrough. There are some great "Eureka!" moments along the way, but they feel stifled by frustrating instances of halted progress. The worst thing that can happen to a player is getting hopelessly stuck; all you want is to see more of the game, but you're locked into this single, exasperating screen until you give up. Whether giving up means turning off your Vita for a while, refusing to play the game anymore, or looking up answers online is up to you. Metrico will show you things you've never seen before, which can be invigorating. But as a puzzle game, it doesn't find the right balance between clever and confusing.