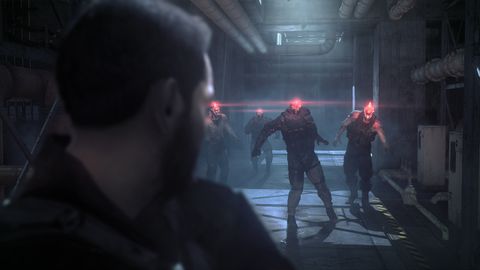 A decent survival game with a rewarding, if uninspired, grind to its resource collecting and base management.

Everyone wants to hate Metal Gear Survive. After that messy divorce Kojima is Cinderella cast out into the cold (Sony’s carte blanche million dollar publishing deal) and Konami’s the evil step-mother staring down from the castle as a crowd of torch-waving internet comments beat at the gate. Whatever the game actually is, some people are never going to like it.

Which is a shame, as this is an enjoyable and rewarding survival game. There’s a satisfying grind to its demands - get food, gather the wood, iron, rags and so on you need to make weapons, fences and other gear. It’s basically a more grown up version of Don’t Starve, right down to accidentally setting things on fire. If you think of games like Rust, Ark or DayZ, only with a single player focus, then you get the idea. The gimmick here being that you’ve fallen through a wormhole into an alternate dimension called Dite (pronounced ‘Dee-tay’) and are trying to get home.

It’s no MGS6 obviously, but then it was never meant to be. It’s a un-numbered spin off side project revolving around the series’ previous ideas of base building and team management. Had Kojima still been a Konami person I suspect it would have got average out of ten as a bit of filler between the main instalments.

In the early stages of the game the survival and exploration is well meted out via small and specific missions to introduce what you need to worry about - food gathering is important upfront as health and stamina is linked to hunger and thirst, the former decreasing as the latter rise. Animals like sheep and goats are marked on the map as side missions to get you started, and you can always grab the odd gerbil along the way. The shame of stabbing tiny rodents with a six foot pipe sharpened to a point lasts… literally seconds, once you see your hunger decrease.

These early objectives work well to reinforce priorities and rules. There are areas full of toxic dust, for example, that you can’t enter without oxygen. This introduces a strict focus on time management, prioritisation and resource awareness. You can ‘buy’ more air but the cost increases each time, so you really have to manage what you have. Spend too long getting distracted or waylaid and you’ll find yourself quickly fighting against the clock, trying not to suffocate or starve.

It can be frustrating to get too far into one of these zones and realise you’ve not got enough air or gerbil steaks to get back alive, but it’s rarely not your fault. It can be tough, but never unfair. Entered a toxic dust cloud and ran out of oxygen? What did you think would happen? The save system backs up the challenge as you can only manually save when you exit the game. There are in-game saves when you leave your base or complete a significant objective but there’s risk every time you set out - of losing what you’ve gathered, or what you’ve achieved. It’s worth pointing out here that the headlines screaming about how Survive makes you 'pay for additional save slots' are missing the point of how the game is structured. A single save is kind of the point and, in fact, you’re actually paying for additional characters in exactly the same way you did in the original Metal Gear Online.

As you progress you set out on longer and longer forays into the world to seek out animals to kill, energy to power a return home, survivors to staff your base and memory boards to find (a plot device that has you upgrading an AI to unlock stuff). The further out you get, the more important using wormhole teleporters becomes. Using these you can jump to specific points once they’ve been reactivated. This introduces a horde mechanic with the Wanderer enemies; feral zombies with crystalline neck stumps for a head (although, helpfully, with just enough of a mouth to still bite). As a rule they mainly stagger around the plains to avoid or attack as you see fit. However, doing certain things, like activating wormhole teleporters and diggers (that harvest energy), calls them in swarms far too large to take on toe-to-toe.

Dealing with these larger numbers is where one of the game’s biggest features comes in: building fences and managing a defence line to hold back waves of enemies. These use all the items you can craft back at your base; things like chain link fences and barricades, as well as claymore mines and molotov cocktails. In single player that means a test of resource and strategy management as you run about placing obstructions and stabbing things through chainlinks, while in multiplayer it’s much the same, except there are three other people to shout at when things go wrong.

Because you essentially teleport in the items you build, you can drop fences in an instant - dealing with perimeter breaches and holding off one problem while you manage another in a very instant and reactive way. It’s an extremely active crisis management where you’re thinking on your feet and dropping barricades as much as you are smashing in neck stumps with a crowbar.

It’s worth mentioning that the Wanderers are really dumb, herding around a single fence in an otherwise open field for example, but it’s an exploitable dumb. The kind of stupid that’s consistent and easy to plan around. Like O2 management, failure here (while annoying) can usually be traced back to a poor decision more than anything else. There’s also a hint of COD Zombies to it all where you get too involved in one area and miss the other crowd of monsters gathering elsewhere.

Like in most survival games the zombie managing and base building ramps up constantly and it’ll be your limit for the demands this makes of you, against the increasing work it requires, to decide when you’ve had enough. Once the game settles into its pace you’ll be growing potatoes and keeping goats, collecting rainwater and managing medical supplies for a whole team of people; all while heading out on more and more unforgiving runs into toxic, dust-infused wastelands. As the missions, demands and responsibilities get harder it all depends on how much you want to push through that barrier. The gameplay and mechanics are sound, introducing new things just as you’re starting to settle into a routine, but there's maybe not quite enough variation to the ‘day to day’ grind. It’s worth noting that the multiplayer’s ‘easy’ missions start with level 20 enemies to give you some idea of where this pitches its overall challenge. While the very existence of this will likely offend the hardcore MGS fan, it’s a decent enough take on a survival craft-em-up with enough personality and freedom in its options to please anyone who likes tackling a challenge on their own terms.

A decent survival game with a rewarding, if uninspired, grind to its resource collecting and base management.