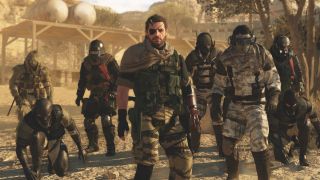 Tactical Team Operations, you say? Don’t mind if we do. Developed by Kojima Productions’ new LA studio, Metal Gear Online acts as the multiplayer component of The Phantom Pain, coming bundled as part of the stealth title’s overall package rather than being peddled as a separate entity. And what truly lovely Koj touches await your online Snakes and Ocelots. Electromagnetic grenades! Plush husky distractions! Rideable mini-Metal Gears! Shut up and take the deeds to our house.

Revealed during December’s inaugural Game Awards, MGO’s debut trailer was unveiled by Kiefer Sutherland (aka the larynx of Big Boss), Hideo Kojima and lead game designer Jonathan Stein. “Team sneaking is what MGS [Online] is all about,” says Stein. “We will make sure the online experience satisfies core fans, as well as new players. Metal Gear characters will also be playable.”

Ah yes, that brings us neatly to the most epic enforced selfie we’ve seen in quite some time. The trailer ends with Big Boss locking Ocelot in a vice-like grip, before snapping a shot of the grimacing gunslinger. Based on the previous three minutes of action, it would appear that established MGS heroes act as team captains; though it’s unclear whether this will grant them any extra abilities over the rest of their stealthy compadres.

The trailer seems to show a capture mode, with Big Boss’ team charged with obtaining data from a heavily armoured computer terminal. This being Metal Gear, the action is of course nowhere near as vanilla as that sounds. C’mon, how many other games have turret gun traps that can instantly catapult a dude into the sky via a Fulton balloon? Said skyward kidnapping suggests you can capture members of the enemy team. Could this reward you with extra lives or other perks?

Thankfully, other items in the trailer are much easier to get a read on. Just take the adorable toy puppy that essentially offers a cuddly take on the series’ long established, Guard-distracting nudey mags. EM grenades are also present, temporarily letting you glimpse enemies through walls.

The one element that really binds the trailer together is a constant sense of communication and cooperation. Near the beginning one dude takes a position on a dusty hill (the action appears to take place in the previously seen Afghan desert), using binoculars to tag foes and provide reconnaissance. Later, a group of soldiers form a phalanx, wielding riot shields in tight formation to deflect gunfire. Intriguingly, those shields are printed with ‘Liquid Riot Force’. Could this be a hint that Solid Snake’s evil cloned brother will appear in The Phantom Pain? We’d bet our finest cardboard boxes on it.

There’s also the small matter of pilotable Metal Gears. Similar in stature to MGS4’s Gekkos (minus the creepy frog legs and constant mooing), these mechs boast mounted miniguns and look to be potential match-deciders. Fret not, though – if you’re hunted down by one it’s still possible to knife the driver and nick his walking tank.

A class system is also in place and seems to span heavily armoured soldiers in bomb suits, balaclava-wearing snipers, recon specialists with goggles and a chap wearing a gas mask. Cutely, it appears you can toggle between classes at the start of a match by bringing up your iDroid. Bagsy the gas mask dude.

Most excitingly of all is the revelation Kojima-san may have slyly leaked MGS V’s release date at the Game Awards. Donning a fetching knitted waistcoat/leather jacket combo, the Dorian Gray of games also sported a T-shirt with the Swedish slogan, “tjugoandra den sjätte.” Translation: “twenty-second and sixth.” Could this point towards a 22 June release date? Koj does love a cryptic tease, after all – remember Moby Dick Studios? If true, there’s going to be one hell of a sneaker to rule both PS4 and PSN this summer.