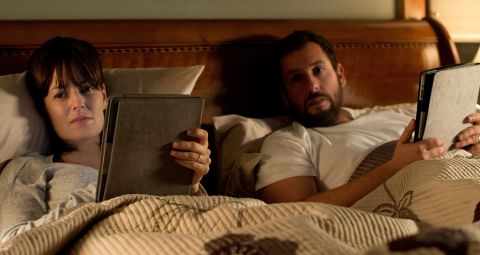 After misfiring melodrama Labor Day, you’d think that Jason Reitman might feel like revisiting the smart-with-a-heart black comedy of Up In The Air, Juno, or Young Adult. Gutsily, he’s opted instead for this bittersweet slice of suburban social-media misery, a techno-cautionary tale in which troubled Texas small-town families weave a tangled web online. It’s one of those movies that hymn human connections over kneejerk prejudice – think Crash, but with internet obsessions rather than racial tensions.

But as the story pace picks up, the film, crammed with luridly competing storylines (anorexia agonies, sexting, hunger for TV stardom) starts to feel like a TV movie-of-the- week about ‘net nasties’. Lacking the darkly engaging comedy of Solondz’s Happiness or the unwavering stare of American Beauty, it can’t get inside the heads of its cheating, fumbling adult characters at all.

Lucid and lacerating about the bitchy, hook-up-obsessed horrors of high school, it doesn’t have the space that Texas-teens TV series Friday Night Lights used to explore similar territory without sensationalism. But where it is happily sure-footed is in Elgort and Dever’s thoughtful, slow-burn romance, conducted in tentative texts and deep teenage conversations (“The earth is just a pale blue dot from space”).

You can’t fault the uniformly excellent performances either, especially Adam Sandler’s. Playing way against type as a downbeat suburban dad as hungry for affection as he is for no-strings sex, he is a revelation here. Too bad that tweeting, emailing and Facebooking are apparently toxic activities, or we’d spread the news…