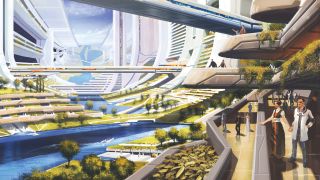 For a 13-year-old girl, playing Mass Effect was an incredibly eye-opening experience. Not only was it my first real introduction into the world of RPGs, but it was also the very first time I’d even remotely cared about sci-fi. This is because Mass Effect is one of the most passionate love letters to the genre that’s ever been written (we’re talking steamier than those infamous James Joyce letters).

It’s a testament to Mass Effect’s accessibility that I was instantly enthralled by its vibrantly diverse world. But even among the game’s many locations, one has always remained the concentrated essence of Mass Effect’s very spirit: the Citadel.

A location like the Citadel is an essential ingredient in this particularly sumptuous cake of a game. Mass Effect’s world, with its cultures, themes and conflicts, is the very basis of its appeal, like the layers of a moist chocolate sponge. Just like any good cake, it needs something to bind the separate facets of this world together: like a sweet, edible glue. What I’m saying is: the Citadel is the buttercream of Mass Effect. And who doesn’t like buttercream?!

The location serves as a realistic way of bringing all the different elements of Mass Effect’s world under the same roof. This is where players are freed from the constrictions of the opening set-piece to explore an entire space station, chock-full of interesting people and exciting encounters. It marks the very beginning of your adventure as Shepard; it’s where you’re given an all-access pass to the stars, the keys to your very own spaceship (the legendary Normandy), and told: ‘the galaxy is your oyster, prepare to consume’.

The best Mass Effect merchandise in the galaxy

It certainly helps that the reveal of the Citadel is such an unapologetically indulgent moment, with the camera lingering on every intricate detail. As the soundtrack builds to a huge crescendo, the shot pulls back to show the sheer size of the station. It’s a scene that completely epitomises all the ambition and wonder behind the original Mass Effect.

Thanks to the game’s carefully structured plot, there’s a rarely a dull moment spent on the Citadel. Unlike many other hub-worlds, the Citadel doesn’t really require players to return that often. Making a return trip always feels like more of a voluntary choice, rather than a necessary chore, and usually rewards you with some significant advances in plot or fleshed-out side-quests.

I still have incredibly fond memories of discussing religious philosophy with one very enthusiastic hanar (that’s a space-jellyfish, if you didn’t know), and confronting the devious Nassana Dantius after unearthing her dastardly schemes.

It’s too often the case that open world games include vast and impressive locations with nothing to do in them, like a pebble beach on the east coast of England. No one wants to go to a pebble beach, they want to go to the sandy beaches with donkey rides and ice cream vans. That’s what the Citadel is, a sandy beach in an ocean of pebbles.

The Citadel is a sandy beach in an ocean of pebbles

Despite its notoriously slow lifts, the Citadel strikes a fine balance between convenience and exploration. Players can instantly teleport to key locations if they’re in a rush, but there is almost always a way to travel on foot, allowing for all kinds of spontaneous occurrences. Having these options is important; it makes the Citadel feel like a real place that’s inhabited by actual people... err, aliens.

The visual language of the different levels also help in building immersion. From the artificial beauty of the Presidium, right the way down to the seedy underbelly of Chora’s Den, each location reflects the lives of the people inhabiting them. It’s this level of immersion that I feel the later iterations of the Citadel – in both Mass Effect 2 & 3 – lacked. The new locations didn’t feel like places people actually lived in anymore, just new areas to find quest-markers and buy space hamsters in.

Having replayed the first Mass Effect almost a dozen times over, I’m still surprised at how the Citadel never loses its original lustre. The clunky cover mechanics and texture pop-ins may tarnish my nostalgia goggles a little, but the Citadel will always remain the shining jewel in Mass Effect’s crown.

This article originally appeared in Xbox: The Official Magazine. For more great Xbox coverage, you can subscribe to OXM here.