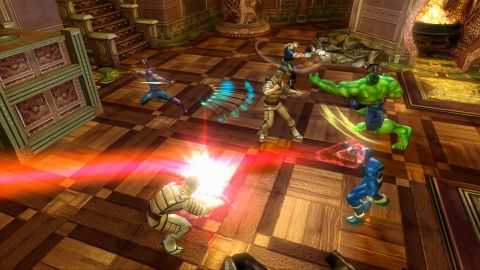 Raven Soft and Activision have teamed up for two of the best X-Men adventures in videogames (X-Men Legends and X-Men Legends II: Rise of the Apocalypse). Now, using some of the best, most powerful and most popular heroes in the Marvel universe, Marvel Ultimate Alliance is an enormous adventure filled with dozens of vile villains and multiple universe-shattering threats. The game features an ambitious story and an equally ambitious cast... that's wrapped up in the same old gameplay you've probably seen twice before.

Comic book fanboys will adore all the characters and villains in this game. You can play as old standbys like Spider-Man, Captain America, and The Fantastic Four. You can go at it with darker heroes like Daredevil and Elektra (is she a hero again this week?) There are even lesser-known characters like Dr. Strange, Ms. Marvel, and Blade plus heavy hitters like Thor and The Silver Surfer. Naturally, there are bunches of X-Men, showing that Raven cares about the environment and recycles. The villains are equally numerous, with foes ranging from Dr. Doom to Ultron to The Wrecking Crew to The Crimson Dynamo to The Mandarin and more. It's a ridiculously large cast that might not mean much to newbies, but will likewise result in some interesting emissions for long-time Marvel fans.

While the cast of characters is second-to-none compared to other super-hero games, the core gameplay of Marvel Ultimate Alliance is nothing new. It's really just an updated version of the hack-and-slash action-RPG fare found in the X-Men Legends titles. You run around levels, beat up minions, find objects, and whale on a boss. Sure, there are some nice enhancements (the team system and charactercostumeswith meaningful upgrades come to mind) and there's some nice streamlining (the items are much more manageable), but it's essentially an obvious progression of what Raven has served up before. Fans of the X-Men Legends games will appreciate the new features, while newcomers probably won't even notice them.

Raven has done a good job at differentiating the game's characters and allowing you to customize them. No matter what your play style, it's a sure bet that you'll find someone you love playing as in Marvel Ultimate Alliance. Brawlers will opt for characters like Luke Cage or The Thing.