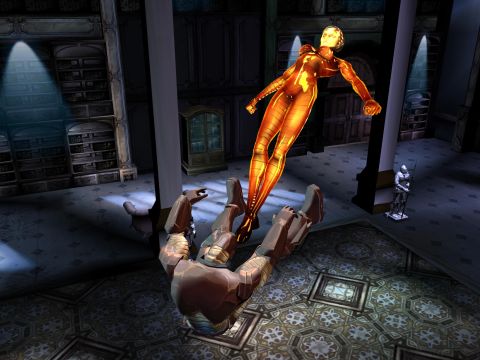 At times like this, all we want to say is “we hate it” and leave it at that. Then at least we’d be able to get on with the important business of sealing it in a bag and throwing it in the river. Well, we should probably explain why.

It’s a bog-standard brawler – actually, make that sub-standard. Enter story mode and you’re plunged into the ‘thick’ of the action, with a woefully unexciting scrap against three robot alien things that you have to defeat through repeated stabs of the A button – it doesn’t get much better either. Subsequent levels feature a host of Marvel characters, ranging from the famous to the scraping-the-barrel-no-names, all of which play much the same in the shoddily presented levels. Then there are the EA-created folks, who are alarmingly uncreative. One is a female version of the Human Torch - brilliant! Another seems exactly like Spider-man, but with green goop subbing for web fluid.