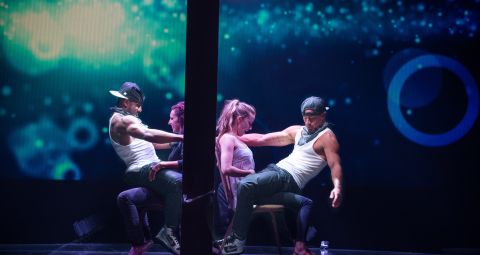 Packed tight, Jacobs’ straightforward sequel may boast less up top than the Soderbergh-directed original, but still bulges where it counts.

Making good on its XXL, the Magic Mike sequel delivers what you’d want in a follow-up about male strippers: more flesh, more abs, more dances, the phworr factor cranked up to eleven.

If this is your thang, then best watch it in an air-conditioned cinema, because the temperature is about to soar. An early scene where Tatum’s Mike gets his groove on in his garage, gyrating on a workbench and using his, er, drill, sets the tone.

The gang decide to head to a striptease convention in Myrtle Beach, South Carolina, for one last hurrah; for his part, Mike convinces the lads they need to drop their routine fireman and hard-hat acts and find something more personal.

Like the best strips, it’s all about the tease – and MMXXL takes its sweet time before Tatum and co. drop trou. For the first hour, the script by returnee writer Reid Carolin allows us to hang out with the chaps. All well and good, except there isn’t much beneath the boyish banter – unlike its predecessor, which dealt with recession-era economics in a very real and telling way.

True, it pleases to see characters who were minor in Magic Mike given more screen-time. But the sequel undeniably misses the presence of McConaughey, who gave the original added flavour.

Arguably, it also misses Steven Soderbergh, who announced his retirement from cinema shortly after Magic Mike. Credited here as executive producer, he hands over the directorial reins to his long-time producer/first AD Gregory Jacobs (2004’s underwhelming Criminal). At least he got his hands dirty – Soderbergh worked on both photographing and editing the film (credited under pseudonyms).

While the chemistry he manufactures among his cast isn’t always on the money, Jacobs certainly understands that in a film like this you need to give ’em what they want. Each member of the team gets to strip – everything from chocolate sauce to stirrups gets used – before Mike comes on to perform his final Magic trick. It’s an exuberant sequence, one that should get Channing fans all a-tingle. Boy, these boys can dance…

Packed tight, Jacobs’ straightforward sequel may boast less up top than the Soderbergh-directed original, but still bulges where it counts.