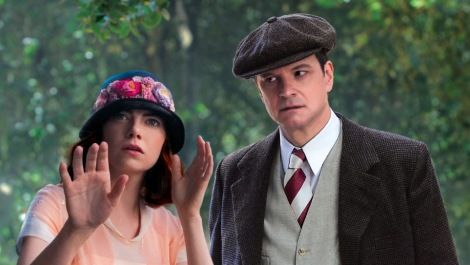 For his 44th film as director, Woody Allen revisits a pet theme: a man mooning over a woman decades his junior. That man is Stanley Crawford, a London magician who performs in yellowface as ‘Wei Ling-soo’, a purported mystic from the Orient. Well-versed in the art of deception, he’s soon whisked off to the French Riviera on a special mission: to expose a supposed American spiritualist as a charlatan.

But meeting Sophie Baker (Emma Stone), Stanley is instantly enchanted. And given that the milksop (Hamish Linklater) currently courting her leaves the tweedy conjurer looking like prime beefcake, the attraction is duly reciprocated.

True, the ensuing flirtation does go all round the houses. Also, Stanley’s idea of seduction is to conduct himself like a prat. But, despite the age gap, the romance does convince, thanks in no small part to the charming, funny Stone, who also keeps us guessing as to whether she really is clairvoyant or pulling a fast one.

Her physical radiance, meanwhile, is rivalled by Darius Khondji’s glorious cinematography. For all its pleasures, this isn’t A-grade Allen, coming off lightweight next to the recent double whammy of box-office smash Midnight In Paris and Best Actress-winner Blue Jasmine .

Yet it’s certainly a cut above some of the Wood-man’s other dalliances with illusionism like The Curse Of The Jade Scorpion and Scoop . There are scene-stealing turns from Jacki Weaver and Marcia Gay Harden, and if the script gets rickety in places, the clever climax goes some way to paying back our patience.