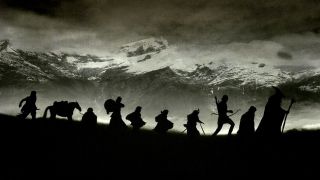 Slowly but surely, we're starting to find out more about the Lord of the Rings TV show. Amazon's flagship series – the rights for which are rumoured to have cost the streaming service $250 million – may not yet have a release date, but there's plenty of information out there: cast members, filming location, and news of a second season renewal have all been revealed.

Whether you're a Tolkien diehard or someone who's just eager to head back to Middle-Earth after watching the movies, we'll break down what to expect from the Lord of the Rings TV show.

The teases for the Lord of the Rings TV show began when a series of maps of Middle Earth were posted onto an official Twitter account, confirming the show will take place during the Second Age – a time period that ended with the first downfall of Sauron (as seen in the prologue to The Fellowship of the Ring). Below, there's more on what the Second Age could mean for the Lord of the Rings TV show, who has been cast in the show, as well as everything else we know. To Mordor!

Latest update: Amazon has announced the first 15 cast members of the Lord of the Rings TV show. Read more in the "cast" section below.

The Lord of the Rings TV show currently has no release date. However, we do know that Amazon started production on the show. There are rumours that Amazon may be trying for a December 2021 release date, which would make sense with some of the confirmed reports we've had.

Reports have indicated that the first two episodes – directed by J.A. Bayona – will initially be filmed, before a 4-5 month hiatus. In this time, the showrunners will see what's working, and then map out the already-commissioned season 2. Deadline reports that season 2 may even film back-to-back with some later episodes from the first season, hence the need for a break and a plan.

In an interview with The Hollywood Reporter, Amazon Studios Head Jennifer Salke corroborated this timeline, explaining: “It’ll be in production in two years. 2021 is the hope. But there are other people who wish it was 2020.”

The Lord of the Rings writers and directors

Writers JD Payne and Patrick McKay will act as co-showrunners on the new series. Speaking of their appointment, they said in a joint statement: “We feel like Frodo, setting out from the Shire, with a great responsibility in our care. It is the beginning of the adventure of a lifetime.”

Joining them as a consultant is Bryan Cogman, who is best known for rising from as assistant on Game of Thrones to writing some of the HBO fantasy series' best episodes. Also announced to be writing episodes for the Lord of the Rings TV show are Gennifer Hutchinson (Breaking Bad, Better Call Saul), Helen Shang (Hannibal), Justin Dohle (Stranger Things), and Stephany Folsom (Toy Story 4).

“This team is our Fellowship, assembled from around the world, all walking the road together to try and accomplish something far greater than any of us could on our own,” McKay and Payne said in a statement. And what an incredible fellowship, indeed.

One of the biggest announcements from the group is Game of Thrones alumni Joseph Mawle, a veteran television and film actor best known for playing Benjen Stark, has joined the cast. The Hollywood Reporter claims that the actor will likely play the villain Oren, though no character in the source material appears to be called this.

Then there's Robert Aramayo, who – like Mawle – previously played a Stark in Game of Thrones, having appeared as a young Ned Stark. He replaced Poulter as the leading male star in the show.

Variety previously reported that His Dark Materials actress Morfydd Clark has signed on to play a young Galadriel. The character – one of the three elves given a ring of power – was portrayed by Cate Blanchett in Peter Jackson's movies. The announcement works with the Lord of the Rings TV series' Second Age setting, as Galadriel is over 7000 years old by the time the events of the movies take place.

Variety also first reported that Markella Kavenagh, an Australian actress best known for starring in the Romper Stomper TV show, joined the cast as the show's female lead. Details regarding her character are being kept very under wraps, though she has a name: Tyra. Ema Horvath – who appeared in the Blumhouse horror Like.Share.Follow – has also been cast in a main role.

In other casting news, Sir Ian McKellen – who played Gandalf in the three Lord of the Rings movies and The Hobbit trilogy – has said that no other actor could play the wise wizard. “What do you mean, another Gandalf?” McKellen told Graham Norton when asked whether someone could take over the role. “I haven’t said yes because I haven’t been asked. But are you suggesting that someone else is going to play it? Gandalf is over 7,000 years old, so I’m not too old.”

The Lord of the Rings TV show setting

Despite theories to the contrary, looks like the Lord of the Rings TV show takes place in the Second Age - counting out a potential series centred on a young Aragon (Strider was not born until the Third Age).

The setting was revealed when Amazon posted an image of the island of Númenor; home to Aragorn's people, the Númenoreans (who are, to massively simplify things, humans with a very long lifespan). They lived there until their home was destroyed, making it a ruin by the events of the main Lord of the Rings story. Whether the show is set on Númenor remains to be seen, but fans certainly are eager to get an insight into the world that came before the movies, with many hoping to see how Sauron rose to power. Perhaps we will even see the forging of the One Ring (which happened in the year 1600 - the Second Age lasted 3441 years).

Tolkien scholar Tom Shippey has also revealed that Amazon had no choice in the matter when it came to the Lord of the Rings TV show's setting. Despite the streaming service spending $250 million on the rights to Tolkien's work, the author's estate have made it mandatory that the show does not cross over with the events of Jackson's movies - Lord of the Rings or Hobbit.

“It's a bit of a minefield – you have to tread very carefully”, he told Deutsche Tolkien. “The Tolkien estate will insist that the main shape of the Second Age is not altered. Sauron invades Eriador, is forced back by a Númenórean expedition, is returns to Númenor. There he corrupts the Númenóreans and seduces them to break the ban of the Valar. All this, the course of history, must remain the same.

“But you can add new characters and ask a lot of questions, like: What has Sauron done in the meantime? Where was he after Morgoth was defeated? Theoretically, Amazon can answer these questions by inventing the answers, since Tolkien did not describe it. But it must not contradict anything which Tolkien did say. That’s what Amazon has to watch out for. It must be canonical, it is impossible to change the boundaries which Tolkien has created. It is necessary to remain ‘Tolkienian’.”

The Tolkien estate have denied the claims, though Amazon has yet to officially say anything on the matter.

Amazon has confirmed that the Lord of the Rings TV show will be filmed in New Zealand; the country that provided the astonishing setting of Peter Jackson's trilogy. Showrunners and executive producers J.D. Payne and Patrick McKay said of bringing the series back to New Zealand: “As we searched for the location in which we could bring to life the primordial beauty of the Second Age of Middle-earth, we knew we needed to find somewhere majestic, with pristine coasts, forests, and mountains, that also is a home to world-class sets, studios, and highly skilled and experienced craftspeople and other staff." Expect lots of aerial shots of snowy peaks, rolling hillsides, and craggy cliff faces.

Sadly, Peter Jackson, who directed the film trilogy, has confirmed he is not involved with Amazon's TV adaptation. He said at a New York Comic Con panel last year that he's "kind of looking forward to it" as a viewer instead. "I was a guy who didn't get to see the Lord of the Rings like everybody else because I had to make it", Jackson explained, "so I'm looking forward to seeing somebody else's take on the Tolkien world."

Check out which series you should be watching this year with the best new TV shows coming in 2020.