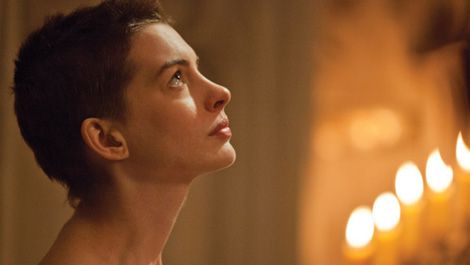 Known in luvvie circles as The Glums, Les Misérables has been seen by so many people since its 1985 London premiere it’s a marvel there’s anybody left to do so.

Well, Tom Hooper’s ( The King’s Speech ) epic movie version will send the devoted home happy and likely demonstrate to the few uninitiated what all the fuss is about.

For the latter, a quick catch-up. First published in 1862, Victor Hugo’s five-volume French door-stopper follows a paroled ex con, Jean Valjean, as he reinvents himself from petty thief to upright model citizen.

Yet try as he might he can’t seem to shake Inspector Javert, a dogged lawman who hounds him even as he becomes a wealthy mayor, surrogate father to an orphaned moppet and, eventually, reluctant participant in a Paris student uprising.

Boldly retaining the show’s sung-through format with vocals recorded live on set, Hooper opts for a gritty, authentic approach - at once intimate and epic - that generally eschews theatrical flourishes.

His leads respond in kind with unabashedly emotional, tear-sodden turns, Hugh Jackman projecting a wounded intensity as Jean Valjean and Anne Hathaway channelling her inner Susan Boyle as Fantine, the ill-used wench who sings ‘I Dreamed A Dream’ (a highlight, even escaping SuBo’s considerable shadow).

OK, so Russell Crowe keeps his upper lip stiff as Javert - no mean feat given the strangulated wheeze he assumes in the pic’s weakest bit of warbling.

For the most part, though, this is a gloriously immersive wallow in squalor and degradation, lightened intermittently by Sacha Baron Cohen and Helena Bonham Carter as a pair of comically rapacious innkeepers, and lit up throughout by a sense of indomitable human spirit.

The biggest drawback is structural, with the second half less kinetic than the first, though Eddie Redmayne’s performance does much to energise his earnest intellectual’s wavering between Amanda Seyfried’s delicate Cosette and Samantha Barks’ earthy Éponine.

Without an interval to refresh, viewers might find themselves exhausted and emotionally drained. But things pick up in time for a musket vs cannon face-off on the barricades thrown up by Redmayne’s band of Arab Spring-mirroring rebels.

Come the wrenching, rousing finale, there won’t be a dry eye in the house.