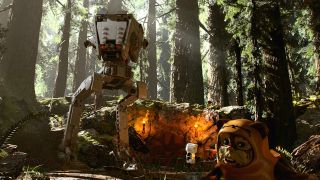 There are some things you can rely on in life. You can never get a good cup of tea in America. You'll always need just one more biscuit. Dogs are adorable. And that a Lego game will be a brilliant take on a major movie franchise, full of the little humorous moments that have become synonymous with TT Games. But with that kind of reliability comes a tiny bit of fatigue. As much fun as the Lego games are to play, you basically know what you're getting when you boot one up. But, with Lego Star Wars: The Skywalker Saga, developer TT Games is looking to shake up that familiarity.

It seems bonkers that the first Lego Star Wars game arrived nearly 15 years ago, but it did on the Game Boy Advance, so there we are. That's not to dismiss it of course; this is the game that laid the groundwork for the ultimate ongoing success of all TT Games' Lego titles. But you'll be pleased to hear that this new Skywalker Saga isn't rehashing old ideas. No, this is the ultimate Lego Star Wars game, as it offers the stories and settings of all nine Star Wars movies - yes, even Star Wars: Episode 9 - in nine totally brand new games. No remasters here, folks.

A new hope for Lego titles

You can play through the stories in whichever order you choose, dipping in and out at any point. The movies arrive in a kind of carousel, and from there it's up to you how you want to dive in. During our extensive (but hands-off) E3 2019 gameplay demo, we were shown that you can freely traverse the Star Wars Galaxy, with all the planets and locations available in a No Man's Sky-style free roam hub world. That means you can play all nine Star Wars movies in their correct order, chronologically, or go rogue and embrace your Dark Side by exploring the narratives at random - or whatever you fancy, really. (Although there is a discussion about what order should you watch the Star Wars movies in that we could get into at a later date…)

What's particularly great, for those who know the movies inside out, is that each location will adapt to where you currently are in the timeline. Visit Tatooine for example, and you'll find different characters according to what's currently happening in your own rendition of the Star Wars saga.

But more importantly, you're going to want to keep coming back and back again to Tatooine, and all the Star Wars locations you know and love in Lego Star Wars: The Skywalker Saga. They are just so darn beautiful. This is a Lego game like you've never seen it before, with each location getting a serious upgrade, as it's a glorious mesh of photorealistic locations combined with adorable little Lego figures and buildings. TT Games tell us that these worlds are built with entirely new game technology, and the developer has focused on imbuing the game with the same sense of scale that you get from watching a Star Wars movie. From what we've seen so far, that's exactly what you're going to get. Tatooine is a desert wasteland spectacle the likes of which wouldn't look out of place in Star Wars: Battlefront 2 - if you ignore the Lego bricks, of course - and the way you can fly around in space between planets made a couple of people watching the demo let out a little gasp.

Other elements have been changed too, in order to heighten that sense of scale. For example, the camera has been brought in closer to the characters, so you get a better view of those amazing vistas, and allows you to feel more involved in the action. You can also completely control the camera for the first time, meaning you can check out the detailing on the models. In Tatooine, the sand can cause wear and tear on the characters, and they can just get dirty and dusty too. It's a level of detail that we've not seen in a Lego game before, and shows just how much of a fresh start this is for the series.

It's not all style and no substance either, as there are a number of exciting additions to the combat too. Combos for example are now a huge focus for the game, and you're even given the option of making your own, which will help build a sense of connection between you and the selection of characters you'll be playing as. Enemies now have health bars, and shooting different parts of their bodies will have different damage attached to them, so you'll need to have slightly more shooting skill than previous Lego entries have required. As much as The Skywalker Saga is bridging the game between photo-realism and Lego, it's also doing the same for making this much more than a family-friendly adventure.

It also helps that TT Games is promising to feature "every Star Wars character you can think of" in its playable roster, all treated with the same love and attention you'd expect from these Lego game veterans. Take C-3PO for example: sometimes he'll get split in half, so you could be just running around as a pair of golden legs looking longingly for your upper half. Very Star Wars, but also done with that tongue-in-cheek humour that really makes a TT Games title unique.

All of this comes together to build a Star Wars adventure that's going to be quite unforgettable. Not only does this look like a whole new breed of Lego game, it may well be one of the best Star Wars games of all time. But we'll have to wait until it arrives sometime in 2020 on PS4, Xbox One, PC and Nintendo Switch to find that out for sure.