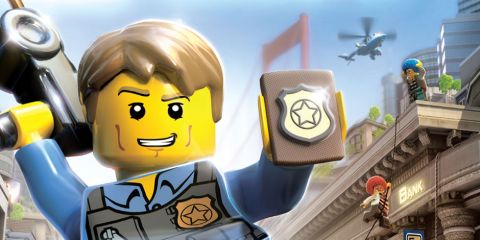 After 10 years of adapting movie and comic book properties, Lego is finally letting its own original products tell a story. Just as you would use your imagination to conjure plot lines with your Lego playsets, Lego City: Undercover takes a ton of familiar Lego City toys and presents a comedic tale involving Chinese gangs, the Italian mob, and car chases. The end result is a Wii U exclusive that console owners could be proud of, even though it takes a couple design steps backward, especially by franchise standards.

Prior Lego games like Lego Batman 2: DC Super Heroes and Lego: The Lord of the Rings have open world settings but not at the comprehensive, or expansive, scale of this game. Lego City: Undercover has a lot of the same optional content you would find in most other urban open world settings. That includes crime-centric side missions, vehicle races, and collectible hunting. It's not exactly a G-rated Grand Theft Auto; Lego City: Undercover encourages a lot of vehicular mayhem since damaged property yields building blocks. Like most any Lego game, it's daunting that beating the story takes up only 20% of the completion progress.

The story centers on protagonist Chase McCain, who personifies the idea of "likable cop." McCain's just blown the cover of his love interest, Natalia, who had been hiding from on-the-lamb criminal Rex Fury. Lego City: Undercover feels like the continuation of an on-going story, and that's because it is--it actually follows the events of Lego City Undercover: The Chase Begins for the Nintendo 3DS, a game that won't be hitting shelves for another month. That said, missing out on the prequel doesn't diminish the enjoyment of Lego City: Undercover but it would have been nice to get better acquainted with the cast.

While Chase is a cop, he's also the brand ambassador for the many other Lego City occupations. Much like the ability-specific outfits in the Lego Batman games, Chase unlocks disguises that grant him various abilities. If he’s an astronaut he can use a jetpack. He can put out fires as a fireman, and he can take coffee breaks as a maintenance worker. These roles can lead to some oddities: You would think a basic skill like watering a plant wouldn't be limited to a farmer or that a robber wouldn't be the only one who’d know how to use crowbars. However, these constraints are more amusing than frustrating, and at least the shoulder buttons allow you to quickly scroll through the eight occupations.

This leads to the game's story missions, which have not strayed much from the formula introduced way back when the first Lego Star Wars came out. Lego objects are often destroyed so they can be reconstructed to form useful items relevant to the mission. Depending on the outfits you've obtained, you'll regularly use grappling hooks, plant dynamite, and teleport to different locations. Lego City: Undercover feels most rewarding when you can clear an area knowing the right disguise for each situation, and not scrolling through the different occupations until you find something that works.

The combat system isn't especially complex, but there is depth even if fighting relies heavily on one-button counter moves. The game makes it abundantly clear when an enemy is about to attack, showing a big X button above him (that's the counter button). Also, a thug isn't out of the picture until you cuff him. This makes combat feel engaging, as you're trying to cuff foes while fending off other attackers.

As one of the rare Wii U exclusives, Lego City: Undercover uses much of the GamePad touch screen and gyroscope functionality as a tool for both you and Chase. Pointing the GamePad at the screen during key events allows for virtual stakeouts as you eavesdrop on conversations a couple blocks away. The pad also displays the city map where you can simply set waypoints through touch. This helps clean up the UI on the TV screen and minimizes pauses in the action. Where the game flow disappoints is when you transition in and out of the open world. You're almost guaranteed a loading screen when you venture into an indoor level. These aren't short load times either, with some lasting as long as a minute.

Lego City: Undercover's most shocking omission is its lack of co-op play, an option that had heretofore been a hallmark of the Lego games. This lack of co-op is doubly unfortunate since the game is loaded with over 40 years worth of TV and movie references and this would have been a great bonding opportunity for young and older gamers. Tweens would surely get the Matrix references, but would many of them get a joke from The Shining or the significance of a trench coat wearing detective saying, "Just one more thing…"?

The consistent delivery of these references complement the story's comedic dialogue and sight gags. You can tell the game's writers are fans of the Police Squad! TV show and movie series. None of the jokes feel forced or drawn out, which helps keep the cutscenes concise and well-paced.

Lego City: Undercover effectively conveys the breadth of the toy company's urban product line with a well-conceived city that you could imagine rebuilding with real life Legos. Even better, Traveller's Tales' knack for witty and well paced storytelling shows that Chase McCain deserves more crime to fight in potential new releases. In the meantime, he ought to find a playable sidekick and a SWAT van to mow down these loading times.