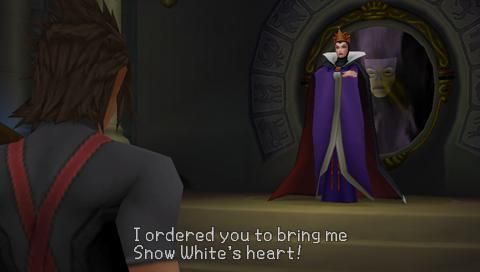 I’ve given the PSP more than my fair share of grief, but I’m starting to realize its biggest drawback is, strangely, its biggest strength in cases like this. Neither Sony nor the gaming press saw that the future of portable gaming would take shape more towards the direction of touch screens and micro challenges, so the PSP’s ability to play full-fledged PS2 games would turn out to be a bit of a double-edged sword in 2010…. HOWEVER! I found the PSP to be the perfect platform for a continuation of Kingdom Hearts, a game that set the bar sky high on PS2. While Birth by Sleep might be a prequel to the main series, fans will probably agree that it’s never looked better and it’s improved enough to be a truly worthy addition to the series.

With no PS3 version by which to compare, it truly succeeds in feeling like a substantial Kingdom Hearts evolution, especially within the context of what every other portable KH has done. No more generic “Jungles” and blah castles, even the Keybladery sheds the simplistic hack-and-slash button mashing of KHII and cobbles together one of the deepest and most rewarding combat systems you’re likely to find on a handheld. HOWEVER! It still the largely a PS2 game; the camera still sucks, the platforming is dated, and it can’t help but feel antiquated within the scope of everything you’ve been playing for the last half a decade.

Although, personally, I find it difficult to fault a game celebrating a legacy that dates back the 1920s for feeling “dated”, mainly because I’m a Disney nerd and Square has given me essentially everything I wanted as a KH fan. I cringe when I recollect on Pinnochio’s Monstro level, and how little it looked less like the belly of a whale and more like an unlit Price is Right set. That’s been addressed, and the worlds you enter have never looked closer to their cartoon counterparts.

Above: You’ll interact with Disney characters in ways you may not expect

Scoff not, gentlemen! Because even the three princess worlds vary so much visually and thematically, you might end up as floored as this animation dork. Sleeping Beauty’s angular characters and cliff faces distinguish themselves from the rounded, colorful woodlands of Snow White, which distinguishes itself from radiantly posh royal goings-on in Cinderella’s world.

If that weren’t enough, you’re given three different characters to play through the game as. The hard headed Terra, Roxas-clone Ventus, and the, uh, ever-female Aqua! Each has their own separate storyline and unique ways to tackle each world. Their story arcs occasionally overlap, yet all three character’s missions tend to differ drastically.

Above: How Terra plays Cinderella’s Castle of Dreams stage

Above: How Ventus plays Cinderella’s Castle of Dreams stage

Yes, they’re the people seen in the ending of KHII, and no, I’m still not sure why that’s important. Maybe you can tell me after you finish the game with all three characters and unlock the grand finale that reveals more insight (which I haven’t done yet) and at 20 hours per character, that makes for one helluva replay value. That kind of gameplay variety is certainly to be commended… even if there’s nothing particularly special about any of these new characters.