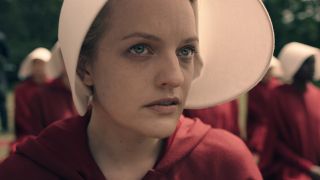 Praise be, readers. The Handmaid's Tale season 2 is here. If your skin just chilled a few degrees at that greeting then you know the power of novelist Margaret Atwood’s prose – or you were transfixed by the TV adaptation of her dystopian exploration of misogyny and corrupted religion, The Handmaid’s Tale.

The Hulu series stars Elisabeth Moss as June Osborne, an average wife and mother whose life is turned upside down when, after plummeting fertility rates and an American civil war, an extreme religious faction rebuilds society into a misogynistic theocracy called Gilead. June is turned into a breeding tool for the ruling class and renamed Offred. Separated from her husband and child, June figures out her path of resistance as she lives under the roof of Mr and Mrs Waterford, married architects of the new regime (Joseph Fiennes and Yvonne Strahovski).

A potent cautionary tale for a Brexit/Trump world, season 1 of The Handmaid’s Tale won an Emmy Award for Best Drama and for Moss as Best Actress, as well as captivating audiences with its stark take on how quickly democratic societies can devolve into waking nightmares. Season 2 will pick up with Offred pregnant and increasingly more informed about the world outside of Gilead. Executive producer Bruce Miller, and his primarily female writing staff, including supervising producer Kira Snyder, are leaning into the jeopardy, and hope, facing June in her new circumstances.

“One of the big takeaways we had from the first season is really understanding how powerful Offred, and June – depending on what time we’re talking about – is as the touchstone for the show,” Snyder tells our sister publication SFX magazine. “The major events in the book form the linchpin of the whole first season, and the book ends when the season ends. But it’s such a gift to have both the book and Margaret Atwood, the person, as resources as we continue on with the show. Because what we were able to do is continue to dive back into the book. The book and Margaret are twin compasses for the story, along with our amazing cast. There are moments and settings and worlds and characters in the book which we did not get to in the first season, which we are happily able to dive into this season."

“Offred’s pregnancy is a fascinating area to explore because in season 1 we only see glimpses of what it means to be pregnant,” Snyder continues. “In Gilead, you see that from Janine (Madeline Brewer) to June and other characters. But now with our main character, she is having this experience which is both familiar because she’s had a child before and completely alien because she’s having this child in this completely changed world. That has been really a strong well of opportunity for stories for this season.”

The Colonies outside of Gilead and Canada, where June’s husband Luke (OT Fagbenle) and her best friend, Moira (Samira Wiley), have escaped to, are also set to be explored this year. “One can conceive of all kinds of events that are happening in this rich and deep world that Margaret Atwood has written that don’t touch on June at all, and we really didn’t do last season,” Snyder says. “In looking at some of the other worlds, like the Colonies, and the other population classes that are in the book that we see in passing, like the Econo-people, they are interesting, but they’re most interesting and relevant for our show if we find ways that they would cross with Offred in a natural way.”

While the first season was almost exclusively told from Offred’s point of view, Snyder says they’ll open up the show’s structure this year. But she emphasises that the story still revolves around Offred’s experience. “We thought that was actually quite successful because by having June be our guide to this world, we see things that she sees. We learn things that she learns. So, things out of her experience, either that would not affect her directly or people that were in her orbit, fell by the wayside. It didn’t really feel like part of the story. And that has been a helpful guideline in picking up the story that really resonates best with her.”

Season 2 will also take a closer look at who else Gilead is subjugating in its totalitarian worldview. “A great story-telling opportunity is how much Gilead as a system, and a power structure, has poisoned everything,” Snyder explains. “It corrupts or subjugates everybody and everything. We’ve had those interesting conversations with viewers of the show and critics, and also among the writing staff, that there are a lot of very different religious viewpoints represented.

Gilead has no place for actual true faith because it’s really about power and control. June is a spiritual person, but the way in which she practises that is not welcomed by the state, and neither is anything else that isn’t their particular church. They literally rewrite the Bible, the Gileadians. So just because you are a person of faith doesn’t mean that you’re safe because the power structure will continually move the boundary lines of what’s okay to suit their purpose. That's something we'll explore this year."

With that expansion will come some new additions to the ensemble cast, including Marisa Tomei as a mystery character who lives in the Colonies, and Cherry Jones who plays June’s mother. Snyder says the writing staff have been following their curiosity when it comes to stories to explore, which has led them to some exciting places. “Cherry Jones is so terrific and that character, as you know from the book, has a lot of impact. Who that woman is helps shape who June is, so you understand where June is coming from. And actor Bradley Whitford is coming into the show at the end of the season in this new commander role. That emerged from a story we were already telling, and this character has a lot of really interesting elements to him.”

One of the aspects of the series that grabbed viewers in season 1 was how incredibly topical it was, even though Atwood’s novel originally came out in 1985. Snyder says that’s because Atwood was so prescient, and coincidences also aligned. “Our staff is full of people who are news junkies. We’re all active and interested in the world, just by the nature of who we are as writers, so those themes and concerns seep into what we do. And the things that Margaret was writing about are very much happening these days.

“Listen, we’re never gonna be a ripped from the headlines show,” Snyder affirms. “But one thing we do try to do is something that Margaret did in her book, which is to make sure that the things that happen, they’re all anchored in something that has happened, or is happening, in the world today. We apply invention to other aspects of what we’re doing, but those kinds of things are anchored in the real world. We try and stay truthful to our story and be careful not to sensationalise, not to be exploitative. And in addition to doing our own research, one of the things we really believe in, certainly, is doing research with experts. We’ve spoken to the UN, we’re spoken with Human Rights Watch, we speak with women’s health advocates and health practitioners to give everything a realistic grounding.”

Snyder admits the show’s incredible success has made it a little more nerve-wracking for the writers going into season 2. They want to live up to the expectations of the first season, but also make Atwood proud. “I think we all recognise that the show is something special to be involved with,” she says with passion. “And everyone approaches it with a tremendous amount of enthusiasm. Everyone’s bringing their A-game all day, every day from every angle, from every department. You have this amazing book looking over your shoulder, but also as a compass. Any time I’ve gotten stuck or something’s not clicking with something that I’m working on this season, you go back to the book. You hunt around and find the right things, or the thing that inspires the right thing, and then you’re back on track.”

You can find more about The Handmaid's Tale season 2 and other great TV shows in our best new TV shows coming in 2018.