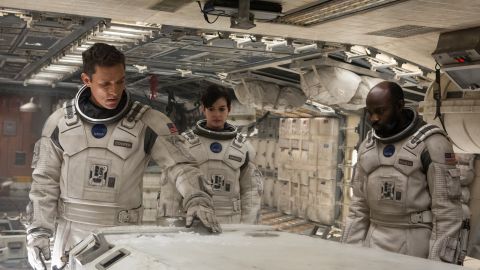 The same could be said for the director himself. Not one content to rest on his cinematic laurels, Interstellar sees Nolan (the man who rejuvenated comic-book movies with his Dark Knight trilogy and gave summer blockbuster fare a mind-bending shot in the arm with Inception ) voyaging into space – and full-tilt science fiction – for the very first time. The result? Often spectacular, sometimes frustrating, infinitely ambitious…

As ever, attempting to sum up Nolan’s labyrinthine plotting (brainstormed once again alongside younger brother Jonathan) is nigh-on impossible without spoiling the twisty, time-hopping narrative and carefully crafted reveals.

The film takes place in a near-future where the Earth is slowly withering, permanently covered in a thick layer of arid dust that makes human survival at best challenging, at worst nigh-on impossible. The population is declared a “caretaker generation”, tasked with improving sustainability for their descendants, while notions of space exploration and other means of survival are actively discouraged (schools now teach kids that the moon landings were “faked” in order to destabilise the Soviet threat during the Cold War).

Trying to make sense of it all is former pilot turned corn farmer Cooper, whose undampened thirst for science and discovery are passed on to his headstrong daughter, Murphy (Mackenzie Foy). After a mysterious gravitational anomaly points them in the direction of what remains of NASA, Cooper is soon persuaded by his former mentor (Michael Caine) to pilot a top secret interstellar mission alongside his own daughter Brand (Anne Hathaway), using a mysterious wormhole to explore strange new worlds suitable for the possible relocation of the human race.

The plot may be higher-than-high concept, but Nolan keeps the world of Interstellar admirably and charmingly lo-fi. Location shoots in Iceland lend a stunning natural edge to the film’s alien landscapes, while the film’s tech – taking cues from films like 2001: A Space Odyssey and Alien – has a tangible, old-school quality to it, from the embryonic, sous-vide-style hypersleep chambers to McConaughey's clunky, faceless robot sidekick TARS (even in the depths of new galaxies, characters still write out their trajectories on white boards and explain scientific theories using pen and paper).

Ditto the movie itself, shot on film in good old-fashioned 2D. It’s to Nolan and his VFX team’s credit, though, that he’s still able to push boundaries despite this traditional approach: Interstellar contains without doubt some of the most inventive, immersive and abstract outer-space visuals ever put up on the big screen.

Despite the scale, though, this is a film about fathers and their daughters. It’s easy to see why Steven Spielberg was once attracted to the director’s chair; in fact, much of the film’s first act takes place before McConaughey even gets into his space togs. If there’s one criticism usually levelled at Nolan’s previous work it’s a lack of emotional heft – a complaint he goes some way to addressing here.

Still, you can’t help wonder if The Beard might have added an extra layer of warmth to a fable that often gets bogged down in exposition (especially troublesome in scenes where Hans Zimmer's overbearing score threatens to drown out the dialogue completely), trying as it does to make the wormhole and space-time theories of physicist Kip Thorne – on which the film is based – accessible to all.

Thankfully, Nolan's helped no end by his lead, the charismatic McConaughey cementing his A-list comeback with a powerful performance that helps ground the grand proceedings and provides the film with its emotional core.

Among all the space phenomena and alien terrains, it's one of his quieter moments that proves the film's small-scale highlight – a heartbreaking scene in which extreme time differences mean he’s forced to literally watch his kids grow up in front of him. It’s also his back-and-forth banter with TARS – a former military droid with a fiercely sarcastic artificial intelligence (voiced by comedian Bill Irwin) – that lends the film some much needed humour among the solemnity of the mission at hand.

Meanwhile, fellow Nolan newbie Jessica Chastain and regular collaborator Caine provide solid Earthbound support with only fairly limited screentime, and Hathaway adds a refreshingly down-to-earth presence to the outer-space adventure, despite being saddled with much of the film’s eye-rolling, cod-philosophical monologues, musing on everything from humanity’s place in the universe to the “power of love”…

If there’s one area that Nolan is visibly more comfortable with, it’s tense, super-sized set-pieces – and he more than delivers here. From a race against a giant, skyscraper-sized wave to some frosty fisticuffs atop a gargantuan glacier (meticulously shot to frame the combatants as tiny ants compared to the enormity of the icy mass they’re traversing), Interstellar contains its fair share of heart-in-mouth moments, the previously untapped corners of space providing ample opportunity to mine fresh spectacle.

And yet, despite his seemingly limitless imagination, the director's ambition ultimately threatens to get the better of him, particularly in the final stretch of the film's bum-numbing, 168-minute running time. With high concept piling up on top of high concept, Nolan’s steady grip on the plot loosens, as space-time conundrums, new dimensions and even the suggestion of extraterrestrial higher powers collide in a cacophony of increasingly difficult-to-swallow revelations.

Here still, it’s McConaughey's space-dad who saves the day, managing to hold focus – and empathy – despite the ludicrousness of the situation around him. Could he finally break the stalemate between sci-fi and Oscar? Either way, the McConaissance continues...