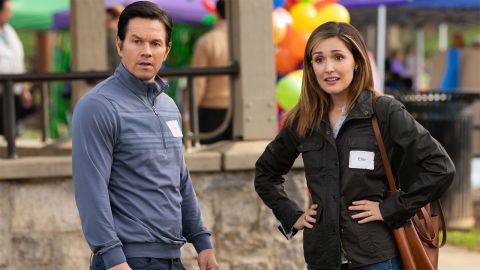 It’s no Parenthood. It’s tonally messy. But Instant Family’s made with excellent intentions and chunks of it work.

From the director (Sean Anders) and star (Mark Wahlberg) of the Daddy’s Home movies comes another film about the travails of parenting, only this time inching into more serious territory. Instant Family is, for Anders, a personal picture: its tale of Pete (Wahlberg) and Ellie (Rose Byrne) adopting three children out of the foster care system is based on his own experiences.

Naturally there is anguish, life lessons and sentiment (some of it earned), but don’t expect too much of a departure for Anders. It’s more of a toe-dip into wrenching drama; there’s always a knockabout gag close at hand and every bitter pill is washed down with a generous spoonful of honey.

The idea, no doubt, is to keep multiplex viewers entertained even as they ponder serious issues, and it works – there’s a story doing the rounds that viewers at test screenings headed straight home to look into extending their own families. Also to be applauded is Anders’ decision to have Pete and Ellie foster Hispanic-American siblings, thus allowing for a welcome message of tolerance. But the mixing of sugar and spice also means that the tone hops around like a kangaroo on a pogo stick.

Taken on their own merits, most of the scenes work. Octavia Spencer and Tig Notaro are a delight as the duo who run the adoption agency, throwing out deadpan bon mots like they’ve wandered in from a Christopher Guest movie; group sessions with the other adoptive parents allow for a spiky support unit packed with oddballs; Joseline Reyes enters the film as the adopted trio’s real mum and brings to keep her life afloat; and some amusing crass-com crashes the party when Pete discovers his new teenage daughter has been sent a dick pic.

Clash the aforementioned scenes together, though, and it makes for a bumpy ride, with Instant Family dealing respectfully with issues of abused and orphaned children one moment and then going for Daddy’s Home-style yuks the next. What just about holds it all together are the performances. Anyone who enjoys Wahlberg doing his befuddled, sensitive-guy routine (as in the Ted movies) will find a lot to like about Pete, a man who worries that he is entering old-dad territory and amusingly believes that adopting a ready-made family wins him back a few years.

Byrne, meanwhile, is an expert at playing characters like Ellie – warm, funny and a little too eager to be liked. Together they gamely embrace middle age, leaving any ideas of ‘cool’ behind as they lean into Pete and Ellie’s desperation to be not just good parents, but the best.

But the real star of the show is Isabela Moner playing teenage daughter Lizzie. Hand-picked by Wahlberg after he worked with her on Transformers: The Last Knight, she’s a star in the making, flashing between agony, attitude and sweetness with total conviction. Whether it’s fiercely protecting her younger siblings or wounding Ellie with a flippant insult here and a crushingly blunt rejection there, her quicksilver volatility married to unwavering likeability is both magnetic and authentic. It might be Anders’ life, but it sure is Moner’s film.

For more hotly anticipated films, check out our list of the upcoming movies you don't want to miss, or catch up on best movies of 2018 you may have missed.

It’s no Parenthood. It’s tonally messy. But Instant Family’s made with excellent intentions and chunks of it work.